No. 7 USC can earn spot in Pac-12 title game by beating UCLA 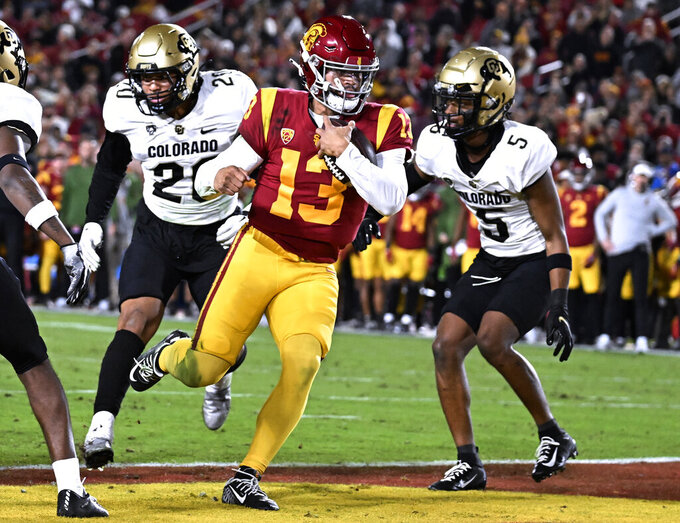 For USC, the road to the Pac-12 championship game boils down to a simple scenario: A win over the Bruins guarantees the Trojans a spot. Along with it, they get city bragging rights. There remains a path to the league’s title game for UCLA but it's not as straightforward. The crosstown showdown features two dynamic passers in USC’s Caleb Williams and UCLA’s Dorian Thompson-Robinson. Williams has thrown 31 TD passes and rushed for six. Thompson-Robinson has 20 TD passes and has run for seven more. USC enters as a 1 1/2-point favorite, according to FanDuel Sportsbook. To the winner goes the Victory Bell, which is a nearly 300-pound bell from a freight locomotive.

The winner will head into the last week of the regular season controlling its path to the league’s title game. The Utes beat the Ducks twice last season — once during the year (38-7) and again in the conference championship game (38-10). Oregon will be hosting a ranked team for a second straight week. The Ducks lost to No. 15 Washington (8-2, 5-2, No. 17 CFP) on Peyton Henry’s winning kick in the final minute. The Utes' last victory over the Ducks at Autzen Stadium was in 2015.

USC defensive lineman Tuli Tuipulotu had 2 1/2 sacks and a forced fumble against Colorado to earn the league’s defensive player of the week honors. ... The Huskies are 7-2 against Colorado (1-9, 1-6) since the Buffaloes joined the Pac-12. That includes a win in the 2016 Pac-12 championship game. ... Huskies QB Michael Penix Jr. was the conference’s offensive player of the week after throwing for 408 yards and two scores at Oregon. ... Washington lost 20-17 in Boulder last season despite outgaining the Buffaloes by a 426-183 margin. ... Stanford (3-7, 1-7) and Cal (3-7, 1-6) compete in the 125th edition of the Big Game on Saturday in Berkeley. The Cardinal lead the series 65-48-11. The inaugural Big Game was at Berkeley in 1904, with Stanford winning 18-0. ... No. 25 Oregon State (7-3, 4-3, No. 23 CFP) heads to Arizona State (3-7, 2-5) as the Beavers return to the rankings for the second time this year. ... Oregon QB Bo Nix is tied for the FBS lead with 39 total touchdowns. ... Either USC or UCLA will score 10 points toward the Crosstown Cup, which is an annual trophy given to the school that has the most successful athletic year versus the other.

Arizona linebacker Jacob Manu, who’s coming off a career-best 10-tackle performance in a win at UCLA. He also had a quarterback hurry and a pass breakup as he earned the league’s freshman of the week honors.

The bowl-eligible Cougars are 3 1/2-point favorites, according to FanDuel Sportsbook, over an Arizona team riding high after a win at UCLA. The Cougars haven’t won in Tucson since 2015.