No. 8 Alabama hosts Auburn in Iron Bowl for braggin' rights 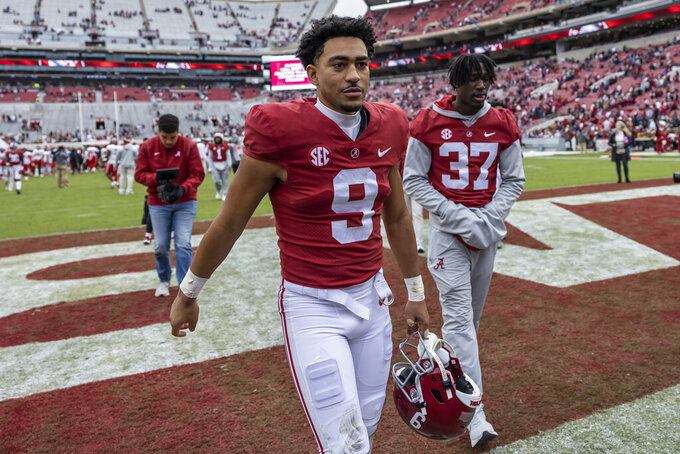 Braggin' rights. That's not what Alabama hoped to be playing for at this point, but it's got to be enough in a state where this rivalry matters so much. The Crimson Tide fell from national title contention with two last-play losses by a combined four points but can reach 10 wins and perhaps enhance its bowl destination. Auburn reaches bowl eligibility with a win under interim coach Carnell Williams. The Tigers have won two straight since stopping a five-game skid.

Auburn's running game against Alabama's defense. Freshman Robby Ashford hasn't been throwing all that much lately, or particularly effective when he does, but he's proven dangerous in a running game that has been even more emphasized under Williams. The Tide is giving up just 107.8 yards per game on the ground, 14th-fewest nationally.

Auburn: RBs Tank Bigsby and Jarquez Hunter have both topped 100 rushing yards in each of the past two games. The 1-2 punch has been effectively carrying an offense that isn't producing much in the passing game and has no consistent receiving threat. Bigsby has 900 yards and 10 touchdowns. Hunter has run for 541 yards and seven scores.

Alabama: QB Bryce Young, the 2021 Heisman Trophy winner, is almost certainly playing his last game at Bryant-Denny Stadium. He's a potential top NFL draft pick. With no star receivers or a dominant offensive line, Young hasn't matched those 2021 numbers but he'll still go down as one of the program's best quarterbacks. He's within striking distance of the program's No. 2 spot for career passing yards and touchdowns.

Alabama coach Nick Saban is 10-5 in the Iron Bowl, including a 6-1 mark at Bryant-Denny Stadium. But overall, Auburn has a 7-6 edge in Tuscaloosa. ... The Tide is in jeopardy of not having a 1,000-yard rusher for the first time since 2018 and almost certainly won't have a receiver reach that mark for the first time since 2017. ... Williams, a former Auburn tailback, opened the 2003 game with an 80-yard touchdown run and ran for 204 yards. ... The Tigers have only thrown eight touchdown passes, with only half going to wide receivers. ... Alabama is 103rd nationally in turnover margin, and Auburn is even worse at 119th. They're 122nd and 102nd, respectively, in takeaways.