No. 9 Bruins look to avoid slipping up against Wildcats 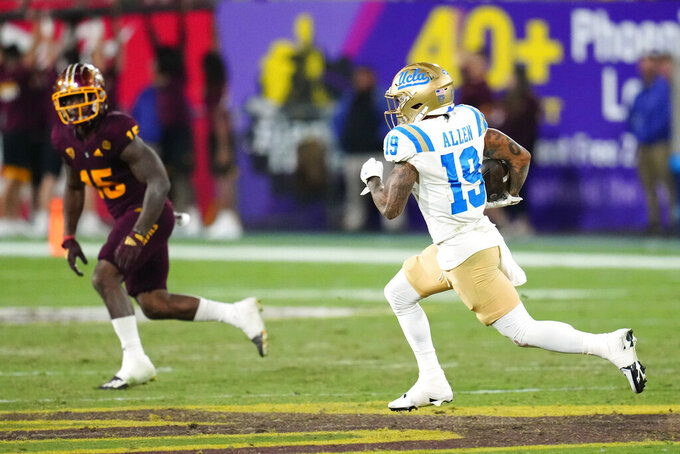 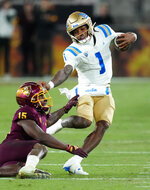 Line: UCLA by 19 1/2, according to FanDuel Sportsbook.

The Bruins took care of business in their last road game outside of California, although Arizona State made things somewhat interesting late in the 50-36 win. Provided coach Chip Kelly’s team wins its final three games, headlined by next week’s city rivalry against Southern California, UCLA is likely to play for a Pac-12 title with at least a chance of making the College Football Playoff. The Wildcats couldn’t make stops in a 45-20 loss at Utah, allowing at least 45 points for the fourth straight game. Aspirations of reaching a bowl in Jedd Fisch’s second season have slipped away because of that porous defense, so a wild high-scoring game might be Arizona’s best hope of keeping that goal available for at least one more week.

UCLA’s running game vs. Arizona’s defensive front. Despite not having top tailback Zach Charbonnet available because of an undisclosed injury, the Bruins still smashed the Sun Devils for 402 yards on the ground with five touchdowns. The Wildcats, who have an inexperienced and undersized defensive line, are likely in for more of the same after allowing 306 yards to the Utes. It was the third time this season Arizona had conceded at least 300 yards on the ground to a Pac-12 opponent.

Arizona: WR Tetairoa McMillan has lived up to his billing as the star of the Wildcats’ 2022 recruiting class. He has at least one touchdown catch in five of six conference games, and McMillan’s average of 17.4 yards per reception is best among the Pac-12’s top 10 most productive players.

UCLA: WR Kazmeir Allen did it all in the win against Arizona State, carrying the ball 11 times for 137 yards and one touchdown and making four receptions for 63 yards. The electric converted RB could see more carries at his former position depending on the status of Charbonnet and backup Keegan Jones, who was shaken up against the Sun Devils.

UCLA has won five straight home games against Arizona, with four coming by double digits. Its last loss at the Rose Bowl in the series came in 2010. ... The Wildcats rank in the bottom 10 nationally in rushing defense (218.7 yards per game), total defense (473 yards per game), scoring defense (38.2 points per game), sacks (1.11 per game) and tackles for loss (3.4 for loss per game). ... The Bruins have rushed for at least 144 yards in every game this season, notching at least 300 yards in their past two outings. Their season low came against South Alabama. ... Wildcats QB Jayden de Laura threw for a season-low 159 yards and no touchdowns against the Utes. He came into the game having passes for at least 220 yards and one score in each of his first eight appearances for Arizona. ... UCLA QB Dorian Thompson-Robinson will make his 45th career start on Saturday, breaking a tie with Cade McNown (44) for most by a Bruins signal-caller. ... Arizona has scored 34 touchdowns (23 passing, 11 rushing) through nine games this season after accounting for 18 scores (12 passing, six rushing) in 12 games last year. ... UCLA has started the same five offensive linemen in every game this season. … McMillan needs 87 yards receiving to pass Nate Phillips for the most by an Arizona freshman. Phillips had 696 yards in 2013.