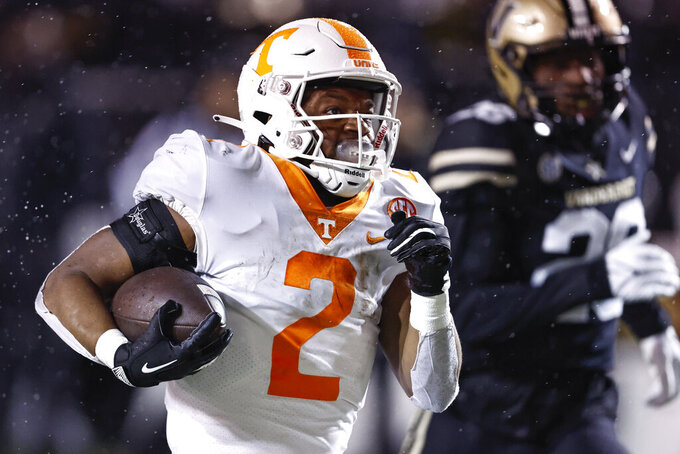 Tennessee running back Jabari Small (2) runs for a touchdown as he's chased by Vanderbilt cornerback BJ Anderson (26) during the second half of an NCAA college football game Saturday, Nov. 26, 2022, in Nashville, Tenn. (AP Photo/Wade Payne)

NASHVILLE, Tenn. (AP) — Josh Heupel walked into a mess at Tennessee with players running for the transfer portal after the university fired the previous coach and nine others in January 2021.

Now Heupel and his Vols can point to a very quick turnaround with the promise of much more to come.

The Volunteers (10-2, 6-2 Southeastern Conference ) rebounded from losing two of their last three games to clinch their first 10-win regular season since 2003 in Heupel's second season, and first overall since 2007. The losses dropped the Vols from first in the inaugural College Football Playoff ranking to 10th.

Heupel noted more than 30 players left Tennessee as he arrived, and the coach applauded the group that chose to stay and buy into what he and his staff wanted. The Volunteers remain “far from perfect" right now.

“We've turned this program in the right direction,” Heupel said. “The future is bright."

Tennessee won its fourth straight, and this was never in doubt as the Vols led 21-0 at halftime and added 21 more in the third for their first shutout in this rivalry since a 48-0 win in 2003.

Wright scored on runs of 50 and 83 yards, while Small ran for a 48-yarder. Dylan Sampson added an 80-yarder in the fourth as Tennessee ran for six TDs. It was the first time Tennessee had two TD runs of 80 yards or longer in the same game.

“When I saw the hole, I just hit it,” Wright said.

The Vols ran for more yards (362) than Vanderbilt managed in total offense (254).

Vanderbilt (5-7, 2-6) missed becoming bowl eligible in coach Clark Lea's second season. The Commodores' had their a two-game SEC winning streak snapped. That streak ended a 26-game league skid that started in 2019. They also more than doubled their two-win total of last year.

Joe Milton got his first start of the season and third since transferring from Michigan last year, replacing Hendon Hooker, who rooted on his roommate from the sideline despite tearing his left ACL last week. Milton hit his first three passes, including a 61-yarder to Jalin Hyatt to set up Small's first TD on a 3-yard TD run.

“When he got hurt and went down, it's really just playing for him,” Milton said of Hooker.

Milton finished with 147 yards passing for his most at Tennessee with his only TD a 7-yarder to Walker Merrill in the third.

Dee Williams returned a punt 73 yards to put Tennessee up 21-0 midway through the second quarter, grabbing at his left hamstring after crossing the goal line before dancing in celebration.

Tennessee: The Vols came in as the nation's top offense in both yards and points. With the rain, they showed they could score just as quickly on the ground as through the air with four TDs of 48 yards or longer. Five TD drives took 55 seconds or less with the longest of those the game's first posessesion.

Vanderbilt: The Commodores started Mike Wright, who led them to wins over Kentucky and Florida. But he struggled to throw against a Tennessee defense that gave up 453 yards passing last week. Freshman AJ Swann, who missed those games with an unspecified injury, took over in the third and threw for 79 yards, but was incomplete on a fourth-down throw into the end zone in the fourth quarter. Lea said Wright returned late to help protect Swann.

Milton's strong arm was on display all night. He had chances to put the Volunteers up by more. He overthrew several open receivers, including at least three that would’ve been touchdowns.

Tennessee waits and hopes for a berth in either the Sugar or Orange Bowl.