No. 9 UCLA and No. 10 Oregon prepare for showdown in Eugene 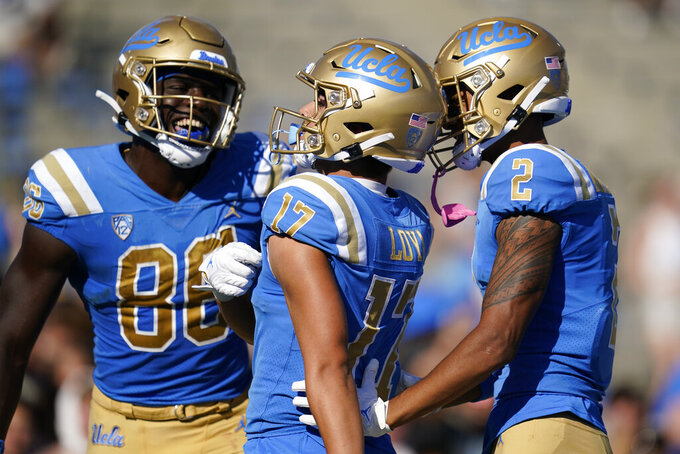 This year, not as much. When No. 9 UCLA visits No. 10 Oregon on Saturday, there are more compelling storylines — like two quarterbacks who are among the Pac-12's best this season.

UCLA's Dorian Thompson-Robinson is completing 74.8% of his passes and his efficiency rating is 108.6, putting him atop the Pac-12 and among the leaders nationally.

The Bruins (6-0, 3-0 Pac-12) are coming off a bye. Thompson-Robinson threw for four touchdowns and ran for another in the Bruins’ 42-32 victory over then-No. 11 Utah at the Rose Bowl two weeks ago. The fifth-year senior has thrown for 15 touchdowns this season and run for four more.

“You know, he gets better every single day,” Kelly said about his quarterback, known by the initials DTR. “He’s always trying to get better, he has that mentality. I don’t think he ever thinks he’s arrived. He’s always trying, ‘Can I get better at this? Can I work at this?’ and it’s neat to see his growth over that time. But he’s got a world of talent.”

Oregon's Bo Nix, a transfer from Auburn, is also a mobile threat who has thrown for 12 touchdowns and rushed for eight. Nix ran for three scores against Arizona on Oct. 8. The Ducks (5-1, 3-0) are also coming off a bye.

“We’re gonna be on the road out there in Eugene, so yeah, as being an away team we’ve got to stay calm, do our jobs. We've got to kill the penalties,” Blaylock said. “Penalties are one thing that’s been keeping other teams in the games with us, so we limit those, get off the field on third down, we should have a great day.”

ESPN's “College GameDay” will broadcast from Saturday's game between the only teams that are unbeaten in Pac-12 play.

UCLA has won nine straight dating to last season, the second-longest active streak in the FBS. The Bruins' six wins to start the season are the program's most since 2005.

The Ducks have won five straight since a season-opening loss to Georgia. They have won 22 straight games at Autzen Stadium, the third-longest streak in the nation.

“I think the main thing is just keeping it consistent, making sure that we take this as just the next game on our schedule,” Nix said. “It's important for us to go out there and play a complete game so we can continue to build on this season.”

Kelly returns to Eugene, where he coached from 2009-2012. During his tenure, the Ducks were known for their speedy “blur” spread offense.

Kelly led Oregon to the Bowl Championship Series in each of his four seasons, including the national championship game following an undefeated 2010 season.

“It’s a special place in my life. A lot of great people there that had a profound impact on my life,” Kelly said. “But I’m not playing the game. We’re totally focused. ... It’s a business trip, just like any other away game.”

Kelly is 0-3 against Oregon since taking over at UCLA in late 2017.

A BIT OF HISTORY

UCLA hasn't won in Eugene since 2004, when quarterback Drew Olson led the Bruins to a 34-26 win. Overall, the Bruins haven't defeated the Ducks since 2017.

The Ducks are no doubt quizzing receiver Chase Cota, a UCLA transfer who ranks second on the Ducks with 279 receiving yards this season. Last year he ranked third among the Bruins with 18 catches for 286 yards.

“He can share some common knowledge, but ultimately there are certain things that have changed since he’s been there just like there’s things that are different for us,” Oregon coach Dan Lanning said.