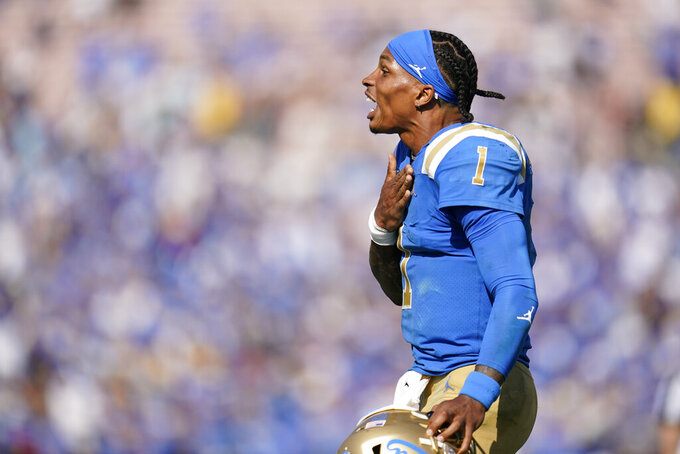 UCLA quarterback Dorian Thompson-Robinson (1) celebrates after a touchdown during the second half of an NCAA college football game against Utah in Pasadena, Calif., Saturday, Oct. 8, 2022. (AP Photo/Ashley Landis)

Line: Oregon by 5 1/2, according to FanDuel Sportsbook.

It is the first game between two teams ranked in the top 10 at Autzen Stadium since No. 3 Oregon defeated No. 7 Michigan State in 2014, and the first at Autzen between two top-10 Pac-12 teams since the No. 4 Ducks beat No. 9 Stanford in 2010. The Ducks, who are coming off a bye, have a 22-game winning streak at home, third-longest active streak in the nation and one win away from tying the school record. UCLA, also coming off a bye, is looking for its first win in Eugene since 2004.

Both teams have strong rushing attacks: Oregon is ranked atop the league with an average of 241.7 yards a game, while UCLA is second with 211.5 per game. So the key for both teams could be rushing defense, and they're equally close atop the league: Oregon is allowing just 99 yards a game while UCLA is averaging 98. The Ducks rushed for seven touchdowns against Arizona two weeks ago, most in a single game since 2017.

UCLA: Quarterback Dorian Thompson-Robinson threw for four touchdowns and ran for another in the Bruins' 42-32 victory over then-No. 11 Utah at the Rose Bowl two weeks ago. He now has the school record for passing touchdowns with 76. Thompson-Robinson leads the nation with a completion percentage of .748.

Oregon: Quarterback Bo Nix has thrown for 12 touchdowns and rushed for eight. He's one of 12 Power 5 QBs to have as many passing and rushing scores through six games. His eight rushing TDs are second-most in the Pac-12. Against Arizona on Oct. 8, Nix rushed for three scores.

ESPN's College Game Day will be in Eugene. ... Oregon hasn't downed a top-10 team at home since beating No. 7 Washington in OT in 2018. ... The Ducks have won three straight against the Bruins. ... Oregon ranks 10th nationally in rushing offense and 14th nationally in rushing defense. ... UCLA running back Zach Charbonnet leads the Pac-12 with an average if 123 rushing yards per game. ... Bruins coach Chip Kelly was head coach at Oregon from 2009-2012. He led the Ducks to the national championship game in 2010.