Notre Dame seeking a jumpstart against Alabama in CFP semi 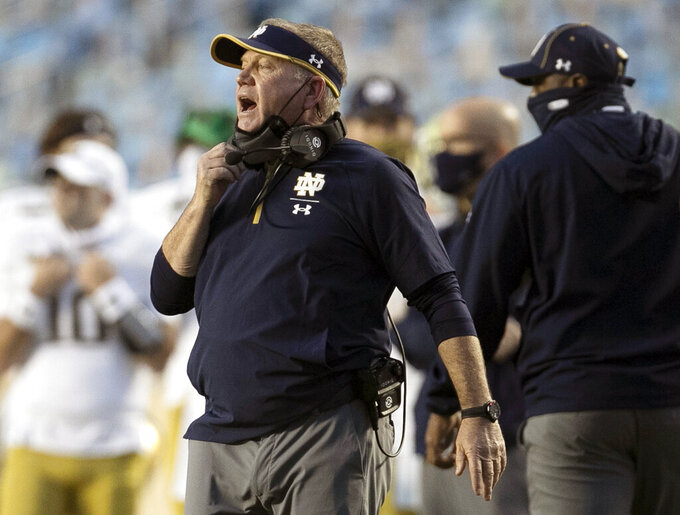 SOUTH BEND, Ind. (AP) — Brian Kelly isn't holding back on one of the primary goals for Notre Dame in the College Football Playoff semifinal against Alabama on Friday.

“We want to run the ball, we need to run the football,” Kelly said. “Based upon who we are and how we have operated this year, we will have to run the ball more effectively that we did the last time we played.”

The last time out was a 34-10 loss in the ACC championship to No. 2 Clemson, a sour note for the Fighting Irish heading into the showdown against the top-ranked Crimson Tide. The laundry list of what wrong was long — 44 rushing yards on 30 carries, six sacks of quarterback Ian Book and just 3 of 12 on third-down conversions.

Next up is the high-powered Alabama offense led by a pair of Heisman Trophy finalists in quarterback Mac Jones and wide receiver DeVonta Smith with rugged running back Najee Harris pounding away for a team that averages 49.2 points through 11 straight victories.

The best way to stop that, Kelly believes, is by keeping the offense on the sideline. Notre Dame's offense is averaging 33:57 minutes of ball control per game (eighth nationally).

“We’re cognizant of the fact that this is an electric offense that scores bushels and bushels of points,” Kelly said of the Tide. “Our offense has traditionally been a ball-control offense. We can’t come into this game and change who we are. That’s kind of been our DNA this year. We can’t be three-and-out. We want to hold on to the football.”

After eking out a 12-7 victory over Louisville Oct. 17, Notre Dame went on a six-game winning streak during which it won the time of possession battle in each game while averaging 217 rushing yards, 279 passing yards and more than 40 points per game. Included in that stretch was a 47-40 double-overtime victory over then top-ranked Clemson during which Book finished with 377 yards in total offense and running back Kyren Williams had 140 rushing yards, one of his six games over 100 yards during a 1,061-yard debut season.

The fourth-ranked Irish will be without junior center Jarrett Patterson, the vocal leader on the offensive line with 21 consecutive starts before season-ending foot surgery in late November.

“Jarrett is the best center in the country, if I’m being honest,” insisted second-team Associated Press All-America tackle Liam Eichenberg. “We miss one of our best players.”

The Irish have started first sophomore Zeke Correll, who suffered an ankle sprain late against North Carolina, and now senior Josh Lugg in Patterson’s place. But the line hasn’t been the same because of some poor execution – Correll and Lugg each have had snap issues – and has surrendered 10 sacks of Book in the last three games.

“We have to focus one play at a time, especially on third down,” Book said. “It’s how you win games. We want to win that third-down battle. And that’s what we plan to do.”

Book has been electric at times this season extending plays with his feet. If that avenue is closed down, it could mean more short passes to tight ends Michael Mayer and Tommy Tremble and possibly screens utilizing Williams.

That could help open the rushing lanes against an Alabama defense that features All-America cornerback Patrick Surtain II and linebackers Dylan Moses, Christian Harris and Will Anderson Jr., a freshman who led the Southeastern Conference with seven quarterback sacks.

First-year offensive coordinator Tom Rees, a reserve quarterback on Kelly’s 2012 Irish team that lost 42-14 to Alabama in the BCS championship game the last time the teams met, doesn’t believe Book needs to put it all on his shoulders.

“I don’t think there’s anything heroic he needs to do that’s going to single-handedly win us the game,” Rees said. “For us (it’s about) being more consistent on first and second down ... not getting behind the chains and putting ourselves in third-and-long situations.”