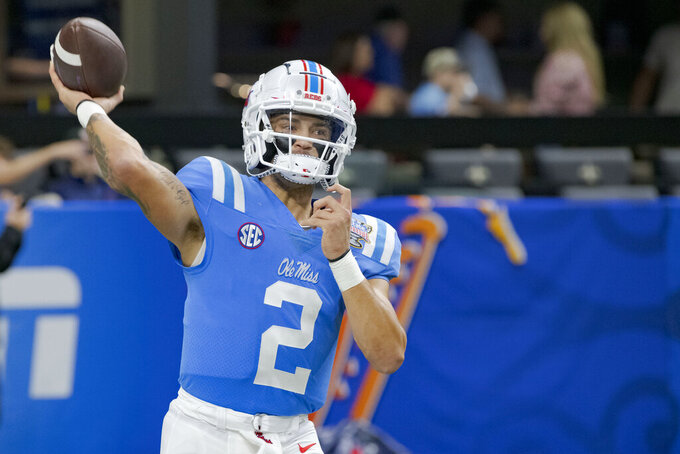 NEW ORLEANS (AP) — Mississippi quarterback Matt Corral injured his right leg while being sacked by Baylor's Cole Maxwell during the first quarter of the Sugar Bowl on Saturday night.

After being helped off the field by two trainers, Corral took a couple of paces on his own as he walked into an injury tent behind the bench. Soon after, however, he was carted to the locker room for X-rays and later returned to the sideline on crutches.

Corral, a projected high-round NFL draft pick next spring, has been one of the most exciting players in college football in 2021, passing for 3,339 yards and 20 touchdowns to go with 597 yards and 11 TDs rushing.

He never wavered in his decision to play in the Sugar Bowl against Baylor, even as many college players in similar situations opted out of bowl games to minimize their injury risk as they prepare to turn pro.

Corral did not shy away from contact during three offensive series he led, taking off and running several times, highlighted by his 15-yard gain in which he lowered his shoulder and powered forward for extra yards through multiple Baylor tacklers.

But a few plays later, his legs folded under him awkwardly as he was sacked from behind by Maxwell amid a cluster of players.

Corral was replaced by freshman Luke Altmeyer on Ole Miss' next possession. That series ended with a tipped pass that was intercepted by Al Walcott and returned 96 yards for the game's opening score.