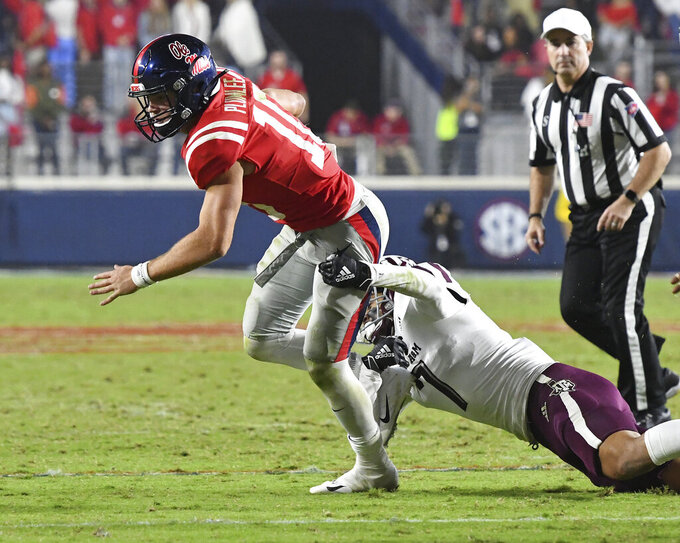 OXFORD, Miss. (AP) — Mississippi's offense has had a week off and now gets to test its ground-oriented attack in a challenging stretch run.

The Rebels spent their week off recuperating from injuries to quarterback John Rhys Plumlee, running back Jerrion Ealy and a trio of offensive linemen. All five players are expected to play Saturday when Ole Miss (3-5, 2-3 Southeastern Conference) tries to boost its faint bowl hopes by pulling off an upset at No. 11 Auburn (6-2, 3-2).

An offense that has struggled to find a consistent identity through eight games has relied heavily on running the ball.

The Rebels average 232.5 on the ground per game to rank second in the SEC behind No. 8 Georgia (236.9). Ole Miss has gained 5.1 yards per carry with a rushing attack led by Scottie Phillips, who has run for 538 yards and five touchdowns.

That ground game faces a daunting task the final month of the season with Auburn and No. 1 LSU coming up in the next three weeks. The challenge begins Saturday against an Auburn defensive front that ranks among the nation's best.

"They're really big and talented," Ole Miss offensive coordinator Rich Rodriguez said Monday. "They have guys that will play for a long time on Sundays. They are active and play really, really hard."

Auburn allows 105.9 rushing yards per game to rank third in the SEC and 16th among all Football Bowl Subdivision teams. Auburn is yielding just 3.2 yards per carry and has collected an SEC-leading 60 tackles for loss.

One of the issues hindering Ole Miss' offense is its one-dimensional nature. The Rebels have struggled to consistently pass as they've alternated between Plumlee and Matt Corral at quarterback.

Ole Miss' passing struggles have led opposing defenses to pack the box and dare the Rebels to throw.

"You can get forced by the numbers to throw it," Rodriguez said. "They can load the box up, play cover zero and force you to execute in the passing game. We work really hard at that.

Ole Miss has completed just 55 percent of its passing attempts this season.

Plumlee has rushed for 563 yards and four touchdowns but has struggled to throw the football accurately. Corral missed two games with a rib injury and has been rotating snaps with Plumlee the last two weeks.

If the Rebels are going to stick with this two-quarterback rotation and have success rushing the football against Auburn, they're going to have to find ways to be less predictable.

"They're really good against the run and good against the pass too," head coach Matt Luke said. "Those are the defenses you play against in this league. They're good at everything. But again, we have got to be who we are. I think in terms of formations, we can do some things to cause them problems, but you just have to do what you do."