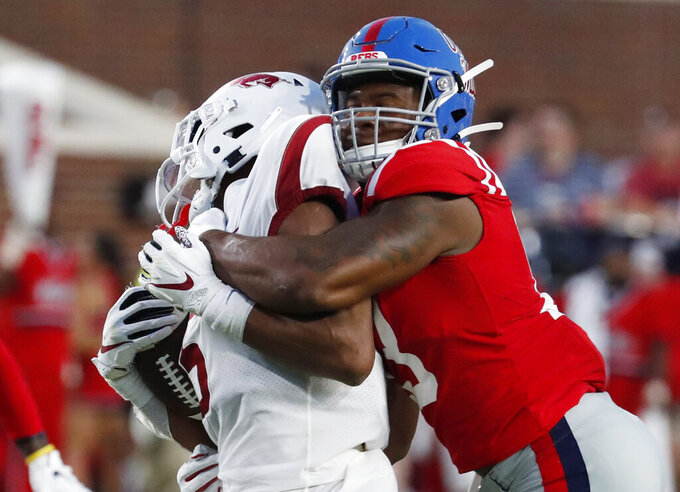 Mississippi linebacker Sam Williams (13) locks up Arkansas running back Rakeem Boyd (5) behind the line of scrimmage during the first half of their NCAA college football game, Saturday, Sept. 7, 2019, in Oxford, Miss. (AP Photo/Rogelio V. Solis)

OXFORD, Miss. (AP) — Mississippi aims to build on what worked in a victory over Arkansas when the Rebels host Football Championship Subdivision program Southeastern Louisiana.

"Southeastern Louisiana presents unique challenges on both sides of the ball," Ole Miss coach Matt Luke said. "We will have to prepare well. And then for us to improve from week two to week three, we will focus on doing the little things better technique-wise and getting better in every area because we can."

Ole Miss followed up a season-opening 15-10 loss at Memphis by winning 31-17 over Arkansas in its Southeastern Conference opener.

Southeastern Louisiana's essentially had over two weeks to prepare for this game since opening the season on Aug. 29 with a 35-14 victory over Jacksonville State. The Lions' scheduled Sept. 7 game with Bethune-Cookman was canceled due to the threat of Hurricane Dorian.

The Lions tried to make the most of the extra time off.

"We went back to more training camp-like practices because of it, focusing on ourselves and didn't spend much time schematically on Ole Miss," Southeastern Louisiana coach Frank Scelfo said. "They had only played one game prior to that, so there wasn't a whole lot of information to go off of, so we waited until after the Arkansas game to put in a game plan."

After a poor offensive performance against Memphis, Ole Miss fared much better against the Razorbacks as the unit begins to get more acclimated to new offensive coordinator Rich Rodriguez's scheme.

"The effort has always been good since camp," Rodriguez said. "It's just that execution was little bit better, but we still have to get a lot of things cleared up. This is going to be an important week for us."

Here are a few other things to watch when Ole Miss hosts Southeastern Louisiana.

Southeastern Louisiana won't come into this game short on confidence, especially after winning its opener The Lions possess plenty of speed on offense and racked up 384 total yards against Jacksonville State.

"Frank Scelfo is a great offensive mind," Luke said. "He has a veteran quarterback, Chason Virgil, (who) is a transfer from Fresno State. They also have Cole Kelley, the transfer from Arkansas, so they have two very capable quarterbacks. They have a running back, a transfer from Indiana, in Devonte Williams. They have good skill guys and a quarterback that can distribute the ball, so they'll test us on the perimeter."

The most noticeable difference from week one to week two for the Ole Miss offense was the play of its offensive line. The Rebels netted just 173 yards of total offense against Memphis but gained 483 yards against Ole Miss.

Scottie Phillips rushed for 143 yards and two touchdowns on 26 carries against Arkansas.

"I was really happy that we were able to win the rushing battle because that was a mindset with us trying to go in and stop (Arkansas') Rakeem Boyd," Luke said. "And for us to outrush them, that was a big difference."

Scelfo noticed the improvement and cited growing confidence as a source.

"A lot more certainty in what they were doing and what the scheme was, and then they started playing faster once that happened," Scelfo said. "We are really going to have to play well and be prepared."

Ole Miss will be playing its first full game without linebacker MoMo Sanogo, who underwent surgery this week after injuring his ankle in the Arkansas game.

Sanogo recorded four tackles in the Rebels' first two games. He made 112 tackles last season to tie for fifth place among all Southeastern Conference players.