One year of NIL: How much have athletes made? 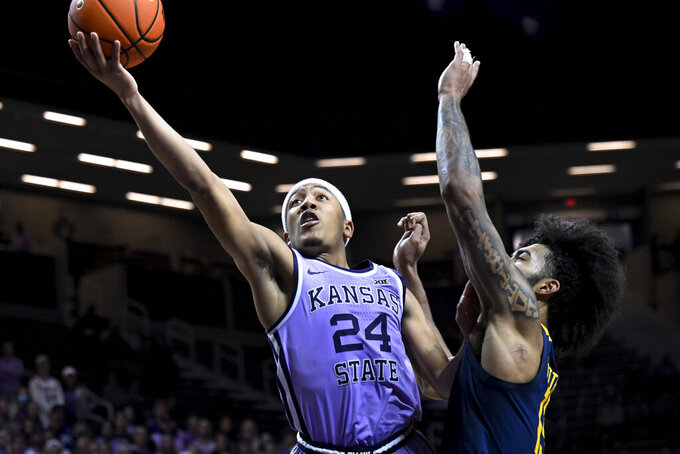 FILE - Kansas State guard Nijel Pack (24) shoots next to West Virginia forward Isaiah Cottrell during an NCAA college basketball game in Manhattan, Kan., Feb. 14, 2022. The first year of the athlete compensation era in college sports evolved into almost everything the NCAA didn't want when it gave the green light last summer. What originally was envisioned as a way for college athletes to make some pocket money based on their celebrity has turned into bidding wars for football and men's basketball recruits and transfers. Pack made one of the first big splashes in April. (AP Photo/Reed Hoffmann, File)

After the first year of college sports’ name, image and likeness era, football and men’s basketball still claim the throne for the number of deals and average compensation, and social media remains the most popular way to get that NIL money.

An average football deal comes out to nearly $3,400 on two platforms. And while softball and women’s basketball generally landed in the top five overall, when you subtract football, women’s sports are getting more deals than men’s sports, Opendorse said. Female gymnasts make big bucks, too: about $7,000 on average per deal, according to NIL platform INFLCR.

A full accounting of the first year of NIL, from July 1, 2021, to June 30 is hard to come by, for numerous reasons. The majority of schools don’t make public the number of deals and amounts their athletes have received (though a couple have divulged some information in what could be considered recruiting or marketing strategy).

There also is no central framework for how and when deals should be reported.

“You have all of these different stakeholders involved in this ecosystem and a lack of consistency, not just in platform where information is being reported, but in requirements relative to what information is necessary,” said Andrew Donovan, the executive vice president of collegiate partnerships at Altius Sports.

So it's up to major NIL tech platforms — some of which facilitate deals and disclosures, and others disclosures only — to fill in the gaps. Sort of.

“I know that what’s being reported is not a full picture," said Donovan, whose organization works with 30 schools on education and strategic guidance and talks with donors, boosters, corporate partners and others. "... Athletes are regularly acknowledging to us that they’re not disclosing. Schools are regularly communicating the struggles that they’re having getting athletes to disclose ... It’s very clear that this is not a full, complete picture of what’s going on in the NIL space.”

What lies ahead for Year 2, beyond maybe new laws or group licensing? Opendorse thinks it's the potential of NIL spending topping more than $1 billion.

An estimated $607.4 million could go to Power Five schools, with an average annual compensation $16,074 per athlete, Opendorse said. Already, about three-fourths of the known or forming collectives, which are third-party NIL kingmakers made up of school donors and boosters, are connected to Power Five schools.

Athletes' deals with brands — from financial businesses to apps to fashion — will likely rise, too. Opendorse projects that brand deals will encompass 64% of all NIL compensation in Year 2 and bring in about $730.4 million.

Donovan, a former president of the National Association for Athletics Compliance, also believes there will be more importance placed on helping athletes understand tax implications of NIL deals: “There's several schools across the country that are doing a good job there, but that needs to be built out as we see these large financial figures."

ATHLETES MAKE HOW MUCH?

Football NIL deals tend to be hefty, with an average of $3,390.95 on Athliance and $3,396 on INFLCR. Opendorse broke down average compensation per football position, ranging from $403 for a specialist, $758 for the defensive line and $2,128 for quarterback.

Women's sports overall received $1,084 on average for an NIL deal, per INFLCR, with women's gymnastics soaring to a $7,054 average.

Donor money also favors men's sports — a whopping 93% of it, Opendorse said. The average monthly compensation from donors at the DI level is $1,012.

Meanwhile, 91% of all women’s NIL activities are brand-related on Opendorse's platform, but 62% of all brand compensation went to men's sports.

WHAT ARE YOU DOING FOR YOUR DOUGH?

Social media remains supreme for NIL activity/transactions — 67.6% from Opendorse and 61% from INFLCR, both as of June 30. The average value of a social media NIL transaction is $905 and the median is $50, INFLCR said.

Multi-activity brand endorsement — endorsing something more than once — has a major share in Opendorse's platform at 24.4% of NIL compensation. When it comes to brand activity, 36.73% is licensing rights for an average of $9,877 per deal and 34.19% is posting content with an average of $156 per post.

WHAT THE SCHOOLS HAVE DIVULGED

Kansas athletes inked 219 deals from July 1, 2021, to May 5 — a period that includes the Jayhawks winning the men's NCAA basketball tournament — for a total value of $380,915.01, according to public records obtained by the Topeka Capital-Journal. The majority of deals were for less than $1,000.

At least one Kansas athlete from all 18 sports had at least one deal, according to a recent release from the school.

And at Norfolk State, running back Rayquan Smith let everyone know he has 66 NIL deals, calling himself the “ King of NIL.”