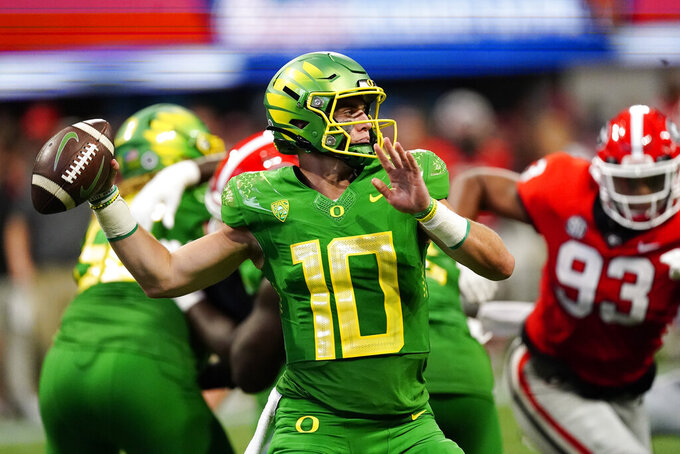 Oregon quarterback Bo Nix (10) throws from the pocket in the second half of an NCAA college football game against Georgia, Saturday, Sept. 3, 2022, in Atlanta. (AP Photo/John Bazemore)

Perhaps no team in the Pac-12 has worked the transfer portal harder than Southern California.

The Trojans have 33 players who previously played at other four-year universities on their roster. In contrast, Stanford has just one.

For USC, it was out of necessity. New coach Lincoln Riley was tasked with replacing 21 scholarship players who went to the portal following the 2021 season, including quarterback Kedon Slovis. Star receiver Drake London was among the 16 Trojans who declared for the NFL draft.

The NCAA's rule change allowing players to transfer once without sitting out for a season opened the floodgates. Added to the mix was the COVID-19 rule that gave some players an extra year of eligibility.

About half the starting QBs for the 131 Football Bowl Subdivision teams in this season’s openers didn’t initially attend their current schools. That includes 32 of the 65 Power Five teams, with 19 of those being first-year transfers.

In the Pac-12, seven teams had a first-year transfer quarterback start their openers.

USC has one of those quarterbacks, Caleb Williams, who came to Los Angeles from Oklahoma, where Riley was formerly the head coach. Williams threw for 341 yards and four touchdowns on Saturday in a 41-28 victory over Stanford.

"I don’t know in the long run if it’s healthy or not. I’m in favor of student-athletes having more freedom than they’ve had in the past in both the NIL space and the ability to transfer,” Shaw said. “I don’t know, we’ll see. It’s going to take a few years for us to know what’s good and what’s not good about where we are. I am kind of a traditionalist to a certain degree, but I really want progress.”

Shaw said his top concern is making sure athletes graduate amid all the movement.

“It’ll be interesting to see if that changes now in football and men’s and women’s basketball, if those graduation rates start to plummet because there’s so much transferring from a quarter school to a semester school, losing out on some credits, getting behind," he said. "Ultimately, I want student-athletes to participate in their sport and graduate.”

How some other Pac-12 programs have utilized the transfer portal:

In fall practice, new Oregon coach Dan Lanning said programs have to be smart when it comes to transfers.

Oregon added 21 transfers to its roster — along with 53 freshmen. The Ducks are among the youngest FBS teams.

Oregon's most high-profile transfer is former Auburn quarterback Bo Nix. Although Nix had a shaky start in the Ducks' season-opening loss to Georgia, he rebounded by throwing for five touchdowns against Eastern Washington on Saturday.

The only quarterback transfer in the Pac-12 who didn’t come from a Power Five school was Cameron Ward at Washington State.

Ward arrived on the Palouse after setting school records with 6,908 passing yards and 71 touchdowns over two seasons at Incarnate Word, an FCS school in San Antonio.

“I want to be on the record in saying I’m a believer in Cam Ward. Cam has come in and earned the trust of this football team through repetitive action and hard work. He’s put in the hard work behind the scenes,” Dickert said.

While Ward hasn't put up flashy numbers this season, he was competent in the season-opening win over Idaho and the 17-14 upset victory at Wisconsin last weekend.

Arizona State lost some 18 players to the transfer portal, including quarterback Jayden Daniels, defensive tackle Jermayne Lole and linebacker Eric Gentry. The lingering cloud of the NCAA's investigation into improper recruiting practices contributed to the exodus.

Additionally, 11 Sun Devils went to the NFL. Now Arizona State has a roster with 43 newcomers, including recruits and transfers.

“I think we all get worried about the players that leave. I don’t worry about guys leaving. Who are we getting, right? Who wants to come here?” coach Herm Edwards said. “We had a lot of talented players to sign on. That’s kind of fun to watch.”