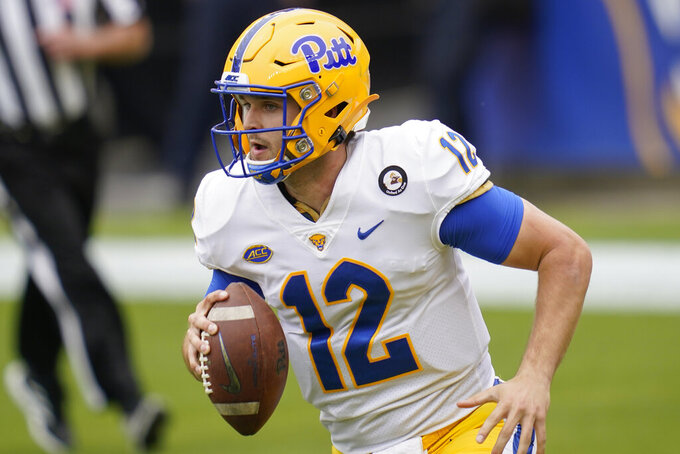 In the life of a college career, the gap between Patti's starts is indeed immense.

Following the decision by Kenny Pickett to opt out and prepare for the NFL draft, Patti has been named No. 13 Pitt's starter in Thursday night's Peach Bowl against No. 11 Michigan State.

It will be the first start for Patti since Sept. 28, 2019 when, as a redshirt freshman, he led the Panthers to a 17-14 win over Delaware when Pickett sat out with an injury. Since then, Patti has been mostly an observer as Pickett became one of the nation's top quarterbacks.

Finally, Patti's patience will be rewarded. The junior will be in the spotlight as he attempts to prove he deserves to be Pitt's starter in 2022.

“I don’t have many reps but I'm still a little bit battle-tested," Patti said. "And I’m excited to get out there and play again.”

Patti’s limited exposure, especially this season, has made it difficult for Michigan State to prepare a defensive plan.

“It was a real deal to be able to say, OK, who is this guy?” Spartans defensive coordinator Scottie Hazelton said Monday.

Hazelton’s conclusion: “I think that you see a lot of the same things out of him that you saw out of Kenny.”

There's another important change for Pitt on offense against Michigan State. Tight ends coach Tim Salem is serving as interim offensive coordinator after Mark Whipple left for the same job at Nebraska.

Whipple conferred directly with Pickett on the sideline during games. Salem will call the plays from the press box.

Patti's performance will be the most important factor in determining if the Panthers realize their goal of a smooth transition on offense. Salem said he has confidence Patti is prepared for the opportunity.

“Yes, we've got a new quarterback, but he’s been involved, he’s been around,” Salem said. “We’re going to go full speed, 100 miles an hour. It’s life without Kenny. That’s just the way it is. We’re still going to show up and play. And I think our players are very excited about that.”

Patti completed 23 of 37 passes for 271 yards with two touchdowns and one interception against Delaware in his only previous start. That tops his combined passing totals from 2020 and 2021, when he threw only a combined 19 passes.

Pitt still has Jordan Addison, an AP All-America first-team selection who won the Biletnikoff Award as the nation's top wide receiver. Addison, who led the nation with 17 touchdown catches, said “I don’t think it will be too difficult” to adjust to Patti's passes.

“I would say he knows where to put the ball at on any route and he has great touch,” said Addison of Patti.

“I think just the reps I’ve got in practice and being able to watch Kenny is a good advantage,” Patti said. “... I’m just ready to go with whatever they throw at us.”