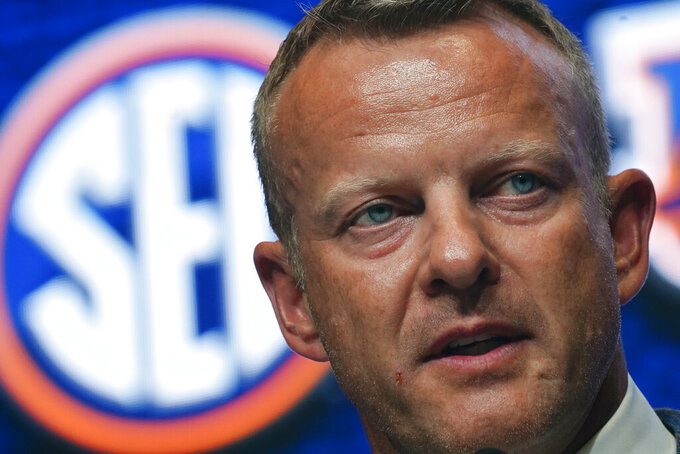 Last season, 30 major college football programs made coaching changes, including some of the bluest bloods in the sport — Southern California, Oklahoma, Notre Dame and LSU among them — in what was a historic hiring cycle.

All that movement portends a quieter carousel this season.

Well, nobody would have guessed at this time last year that Dan Mullen, coming off an SEC East Division title and a victory against Georgia with Florida in 2020, would be ousted by the Gators before Thanksgiving.

Life comes at college football coaches fast these days. The unforeseen aside, there are a few coaches clearly in need of a turnaround to keep their current gigs.

Athletic director Trev Alberts' decision to bring Frost back for a fifth season after four losing ones could fairly be called unprecedented for a program of Nebraska's status.

By giving the hometown hero and former Cornhuskers quarterback one more shot, Nebraska is situated to both save money and leave Frost no excuses. Last year's 3-9 record included so many close loses it felt like a strange, dark comedy.

The schedule is far more manageable this season. By the midway point, if the Huskers are anything worse than 5-1, it's probably a bad sign for Frost. His buyout dips to about $8 million after Oct. 1.

The attempt to oust Harsin after one season with what ended up looking like a bogus review of the program last winter was peak Auburn dysfunction. He is still here, and there are reasons to believe the former Boise State coach might not be the best fit for this job. Auburn currently has the 67th-ranked recruiting class in the country for 2023.

The athletic director who hired Harsin, Allen Greene, is also currently without a long-term contract. None of the signs look good for Harsin, but this is Auburn so don't discount the Tigers going 8-4 and making things even more complicated.

Collins took over for triple-option guru Paul Johnson with a plan to make Atlanta's ACC school cool and capitalize on one of the most-talent rich metro areas in the country. The Yellow Jackets, alas, have won nine games in three seasons. Flipping the roster was a difficult task, but there have been few signs of progress.

Bowl eligibility could be enough this season to save his job, but Georgia Tech's schedule looks as if it was made specifically to undermine him. In addition to annual games against No 4. Clemson and No. 3 Georgia, the Yellow Jackets also face No. 21 Mississippi and UCF.

The NCAA has been investigating Arizona State for numerous recruiting violations since last year. That forced massive turnover of Edwards' staff. The Sun Devils also took numerous hits in transfer portal departures, losing quality starters on both sides of the ball.

Arizona State is obviously content with riding out the NCAA issues, but if the on-field losses start piling up (the 8-5 finish last year included a 6-3 showing in the Pac-12) it's impossible to imagine the 68-year-old Edwards sticking around much longer.

Norvell is here because there will be a lot of chatter about him being on the hot seat.

Still, his status is not as precarious as his two-year record (8-13) with the Seminoles suggests. With Norvell's buyout pushing $20 million after this season and Florida State making significant investments in facilities, school leadership has signaled it is trying to stabilize the program and plans to have patience.

Now, what happens if the Seminoles go 4-8 against a difficult schedule?

Syracuse is now the toughest job in the Power Five. The school has a long history of football success that goes back to Jim Brown, but now finds itself with no way to recreate it.

Babers has had one winning season in six with the Orange and his contract runs through 2024. His buyout has been reported to be around $10 million after this season.

Whether to keep Babers might be decided by a spreadsheet and calculator more than wins and losses. The bigger issue with Syracuse is existential: Can a school located 165 miles from the Canadian border in upstate New York compete successfully in a conference made up mostly of Southern schools with clear recruiting advantages?