Pitt tries to bounce back as struggling Virginia Tech visits 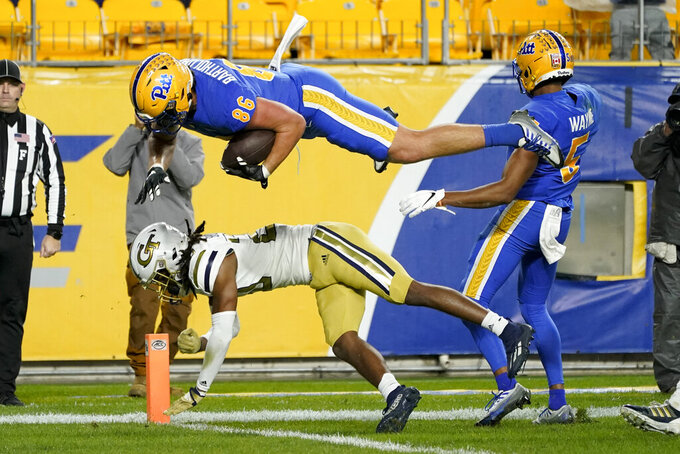 Pittsburgh tight end Gavin Bartholomew (86) dives over Georgia Tech defensive back LaMiles Brooks (20) into the end zone for a touchdown after catching a pass during the first half of an NCAA college football game, Saturday, Oct. 1, 2022, in Pittsburgh. (AP Photo/Keith Srakocic)

Line: Pitt by 14 1/2, according to FanDuel Sportsbook.

Pitt looks to bounce back after getting upset by Georgia Tech. The Hokies, who are coming off a 31-point loss at North Carolina, offer an opportunity to get well. The Hokies are struggling to find an identity under first-year coach Brent Pry.

Virginia Tech offensive line vs. Pitt defensive front. The Hokies have done a good job protecting Grant Wells, allowing just seven sacks through five games, the third fewest in the ACC. The Panthers present a significant step up in class. Pitt leads the ACC in sacks (16) and the defensive front is getting healthier after being banged up.

Virginia Tech: LB Dax Hollifield. He collected 10 tackles against North Carolina and is now in the top 10 in school history in career tackles (313). His two fumble recoveries are tied for the national lead, and the co-captain's steadying presence gives a roster in flux someone to rally around.

Pitt: QB Kedon Slovis. The USC transfer has struggled in his return from an undisclosed injury that forced him to sit out a win over Western Michigan last month. He threw for 305 yards and three touchdowns against Georgia Tech. Most of that production came in the final minutes with the Panthers trying to catch up. Another shaky performance and it's fair to start wondering if Nate Yarnell, who played well in Slovis' absence, will be given a shot.

The Panthers have won three of the last four meetings and have had their way with Virginia Tech at Acrisure Stadium, going 6-1 at the venue formerly known as Heinz Field. ... Pry is plenty familiar with the Panthers. Pry went 3-1 against Pitt between 2016-19 as defensive coordinator at Penn State. ... Hokies K William Ross is the first Virginia Tech kicker since Jud Dunlevy in 2007 to convert each of his first seven field goal attempts. ... The Panthers could be without RB Israel Abanikanda. The second-leading rusher in the ACC left the loss to Georgia Tech with an undisclosed injury. Backup Vincent Davis fumbled twice against the Yellow Jackets.