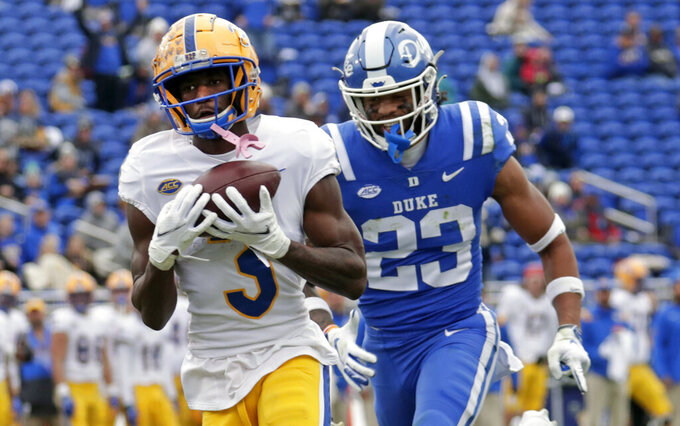 FILE - Pittsburgh wide receiver Jordan Addison (3) hauls in a pass for a touchdown against Duke safety Lummie Young IV (23) during the first half of an NCAA college football game Nov. 6, 2021, in Durham, N.C. Addison is exploring his options. The 2021 Biletnikoff Award winner as the nation's top receiver is in the NCAA transfer portal. Addison put in his paperwork by the May 1 deadline and his entry became visible Tuesday. (AP Photo/Chris Seward, File)

The rising junior and 2021 Biletnikoff Award winner as the nation's top receiver is in the NCAA transfer portal. Addison put in his paperwork by the May 1 deadline and his entry became visible Tuesday.

Two people with access to the NCAA's database confirmed to The Associated Press that Addison's name was in the portal. The people spoke to AP on condition of anonymity because they were not authorized to reveal that information publicly.

Now that Addison's name is in the portal, he can officially be recruited by other schools. The move does not preclude him from staying at Pitt.

The decision comes amid reports that Addison, who caught a single-season school record 100 passes for 1,593 yards and 17 touchdowns for the ACC champions last fall, is considering USC as a potential destination.

Pitt's offense is in a transition period after quarterback Kenny Pickett left for the NFL, offensive coordinator Mark Whipple left for the same job at Nebraska and wide receivers coach Brennan Marion left for same position at Texas.

USC transfer Kedon Slovis and Nick Patti are competing for the right to replace Pickett. Joey Yellen, who transferred to Pitt from Arizona State before the 2020 season, entered the portal last week and transferred to Hawaii.

Addison could not enter this year's NFL draft because he wasn't three years removed from graduating high school, per NFL rules. Should he stay healthy, he is expected to go early in the 2023 draft.