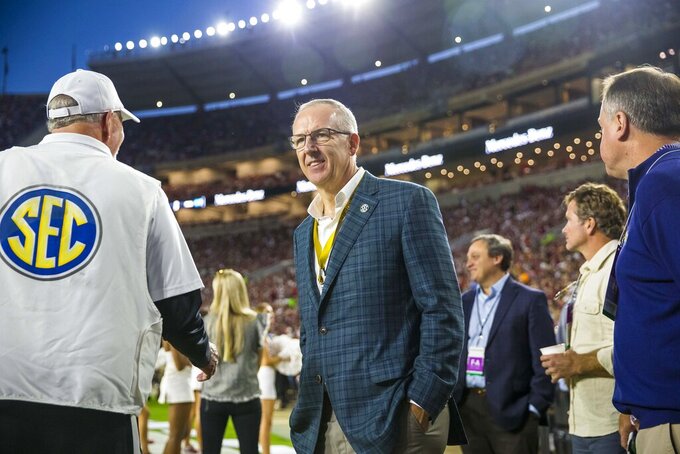 FILE - Southeastern Conference commissioner Greg Sankey watches the first half of an NCAA college football game between Tennessee and Alabama on Oct. 23, 2021, in Tuscaloosa, Ala. Over the past two years Sankey has helped the conference land a new additional $350 million television rights deal with ESPN and guided it through the uncertainty of the pandemic. (AP Photo/Vasha Hunt, File)

DALLAS (AP) — Greg Sankey recalls a toast former Southeastern Conference Commissioner Roy Kramer gave at a gathering in 2015 to commemorate the tenure of Mike Slive, who was retiring after deftly leading the SEC for 13 years.

As Sankey was preparing to succeed his mentor, Kramer told the athletic directors in attendance the new commissioner would need their help more than anyone who had ever occupied that office to “navigate uncharted waters.”

“And that is so true," Sankey said during an hour-long interview at a hotel in Dallas ahead of yet another meeting on College Football Playoff expansion.

Sankey, a 57-year-old native of upstate New York who cut his teeth at small schools and jumped to the SEC from the Southland Conference, has certainly been up for the job so far. In his six years as commissioner, the SEC has become bigger, stronger and more imposing. He has also been an agent of change, viewed warily by some as he wields extraordinary sway.

On Saturday, Sankey will be in Atlanta for the SEC's pinnacle event: No. 1 Georgia vs. No. 4 Alabama for the conference title in —- as as so often happens in the SEC — one of the biggest games of the college football season. One or both will wind up in the playoff.

Over the past two years alone, Sankey has helped the SEC land a new $350 million television rights deal with ESPN and guided it through the uncertainty of the pandemic. He was part of the four-person group that crafted a proposal to expand the wildly popular and lucrative playoff to 12 teams while also planning to grow SEC membership to 16 schools with the landscape-shifting additions of Texas and Oklahoma. And, most recently, Sankey was appointed co-chairperson of a committee that will lead efforts to reconstruct the NCAA's top division.

Sankey could easily be called the most powerful person in college sports, though he would very much prefer not to be. That title, to him, connotes leading by force or demand.

“I use the words influence and effectiveness," Sankey said. "I have been in other commissioner's positions and people listened to me, but not like now. And I fully recognize that and that’s why I think effectiveness has to be included. But you can occupy a role and not be terribly effective. Influence wanes quickly.”

Even before taking over for Slive, Sankey was both effective and influential beyond the SEC.

He is the NCAA policy wonk who wrote the legislation that resulted in the five wealthiest and most successful conferences (ACC, Big Ten, Big 12, Pac-12 and SEC) being given the autonomy to make and pass rules in some areas with no say from the rest of the membership.

In some ways, that move in 2015 was a precursor to where college sports is heading: A restructuring of Division I, decentralizing governance and de-emphasizing the role of the NCAA itself. It has taken considerable time, even if the process is speeding up now. Fitting, perhaps, for Sankey, a marathon runner who was named by the Division I Board of Directors co-chair of a transformation committee along with Ohio athletic director Julie Cromer in October.

The autonomy model was Sankey's idea but he said he doesn't have fully formed ideas for a new Division I nor does he believe that is necessary for the task.

“I would encourage everybody to bring their thoughts, but not a hardened vision,” he said. “I think those thoughts help challenge perspectives, help us think more deeply about what put us here.”

Among many of his peers, Sankey is an ideal person to help lead this change as the NCAA under President Mark Emmert hands more power and responsibility to its 1,200 schools.

"If you’re sitting in a chair and that chair comes with power, then it’s a responsibility to use it to the best of your ability for the good of the cause," ASun Conference Commissioner Ted Gumbart said. “And for him the cause is the SEC — and that means the NCAA.”

Can Sankey provide leadership and direction that is in the best interest of both a conference with almost unmatched wealth, reach and resources and the rest of college sports?

“That’s not keeping me up at nights right now,” Mid-American Conference Commissioner Jon Steinbrecher said. “I really am very comfortable with the people we have leading the transformation committee and then a number of the people on that committee.”

Emmert said he has heard some in college sports express concern with Sankey's growing influence, but recognizes the value he brings.

“He’s got a lot of skills and knowledge and he’s obviously a bright guy who can help find solutions,” Emmert said. “As the head of what many would argue is the dominant football conference right now, he’s put in a position that can be polarizing. And that would be true of anybody sitting there right now.”

For those who might be skeptical about whether Sankey can execute the balancing act, he says: “I can answer people’s questions. I can’t answer your suspicions. I think when people are fair, they ask the questions."

He also notes: “College sports doesn’t need me to save it.”

Sankey uses his push for playoff expansion as an example of his willingness to work for the greater good. He often says the current four-team model works well for the SEC and he's right: An SEC team has made the CFP championship game in six of its seven seasons and won it four times.

“We're asking Alabama, Georgia, LSU and I think other teams in the future to participate in more games to achieve a national championship," he said. "Does the Southeastern Conference truly need that? We don’t.

"We’re not the ones who’ve been left out five of the first seven, probably six of the first eight,” he said, referring to the Pac-12. “Yet, I look and I shared with our membership: College football’s a national sport. We have an obligation not simply to defend our own circumstance, but to look at how do you bring people in so that the strength of college football can be magnified.”

Maybe the biggest reason the expansion process has dragged on throughout the fall was the SEC's realignment bombshell dropped in July.

After news leaked Texas and Oklahoma were talking with Sankey about leaving the Big 12 and joining the SEC, both sides moved quickly to make it official. The Longhorns and Sooners are scheduled to join in 2025, but the move could happen quicker.

The domino knocked over by the Sankey and SEC threw multiple conferences into turmoil for months, trickling down to Conference USA, which nearly fell apart altogether.

Sankey said he was well aware of the effects adding Oklahoma and Texas would have on other conferences and that it did “weigh” on him. He also noted the ACC and Big Ten have caused similar disruptions.

In response to the SEC's move, the Big Ten, ACC, and Pac-12 formed an alliance they hope will lead to more collaboration on the field and off.

"I was and still am curious," Sankey said of the alliance.

Sankey said he often thinks back to Kramer's prescient toast and a conversation he had with Slive the day he moved into his now late friend's office at SEC headquarters in Birmingham, Alabama.

Both predecessors understood Sankey was stepping into a job that was becoming more complex — and more influential.

“And until you sit in the chair, you don’t understand the expectations or the tensions and the pressures,” he said. “I wanted the leadership challenge. And I still want that leadership challenge. But there is nothing easy about what we’re facing. And I think we all need to be honest about that reality in college sports. It doesn’t mean we can’t meet the challenges.”