Present-day AAC focus for No. 8 Cincinnati over future talk 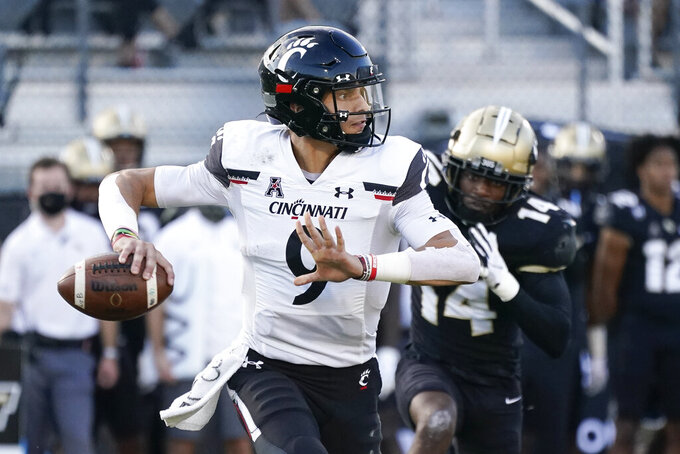 FILE - In this Nov. 21, 2020 file photo, Cincinnati quarterback Desmond Ridder looks for a receiver as Central Florida defensive back Corey Thornton (14) pursues during the first half of an NCAA college football game, in Orlando, Fla. The defending American Athletic Conference champions are the overwhelming favorite to repeat. (AP Photo/John Raoux, File)

Cincinnati coach Luke Fickell knows all the talk about expected playoff expansion, conference realignment and the impact all of that could have on the American Athletic Conference.

For Fickell and the eighth-ranked Bearcats, those are future discussions.

“With all the things that are going on, we’re trying to stay real focused on hey, what’s the now, what’s the immediacy," Fickell said. “Make sure we're focusing on what we need to do for 2021.”

Dual-threat quarterback Desmond Ridder and All-America cornerback Ahmad Gardner are among 16 returning starters for the defending AAC champion Bearcats, the overwhelming favorite to repeat. They are the league's only ranked team and the first non-Power Five team in the preseason top 10 since 2012, starting this season in the same spot it ended last season.

The Bearcats are 31-6 over the past three seasons, with Ridder the starting QB for all of those wins. Their only loss last season was 24-21 in the Peach Bowl when Georgia kicked a go-ahead field goal with three seconds remaining. It was the fifth time in seven seasons that the AAC had a team in a New Year's Six game.

No Group of Five team has made the four-team College Football Playoff, but the Bearcats could establish themselves as a potential contender by midseason. They play nonconference games at No. 17 Indiana and No. 9 Notre Dame, then have their AAC home opener against UCF on Oct. 16.

UCF, with first-year coach Gus Malzahn and the only team to get any first-place votes in the media preseason poll, returns eight starters on both sides of the ball. They include standout junior quarterback Dillon Gabriel, who in two seasons has thrown for 7,223 yards and 61 touchdowns with only 11 interceptions.

The Knights are the only G5 team with multiple New Year's Six appearances. The first was when they capped a perfect record four seasons ago with a win in the Peach Bowl over Auburn, then coached by Malzahn.

“Most coaches around the country look at this program as a gold mine," said Malzahn, who was 68-35 in eight seasons at Auburn before getting fired last December. “I don't care what conference it's in, Power Five or non-Power Five, this is one of the best programs in college football.”

— SMU sophomore RB Ulysses Bentley IV led the conference as a freshman last season with 913 rushing yards (91.3 yards per game), and added 11 TDs. Only Ridder and Tulane running back Cameron Carroll had more rushing TDs, with 12 each. The Mustangs also return WR Reggie Roberson, who had 22 catches for 474 yards and five TDs in only four games before a season-ending left knee injury.

— Calvin Austin III, a speedy senior receiver for Memphis, led the league with 11 receiving TDs last season. He finished with 63 catches for 1,053 yards (95.7 per game).

Cincinnati and UCF were the clear 1-2 picks in the preseason poll, but things get jumbled after that.

SMU returns 18 starters even though quarterback Shane Buechele left for the NFL, going undrafted before signing with Kansas City. Houston has 20 starters after the Cougars last year had a half-dozen games affected by COVID-19 issues for other teams, and not even playing their four scheduled September games.

Five of the AAC's 11 teams are getting started ahead of the Labor Day weekend by playing their season openers on Sept. 2.

Those five early kickoffs are all scheduled within an hour of each other that Thursday night, including UCF hosting Boise State. Temple, East Carolina, Tulsa and South Florida are the other teams starting that night.

The rest of the AAC teams open Saturday, Sept. 4, with Tulane playing at No. 2 Oklahoma, the six-time defending Big 12 champion.