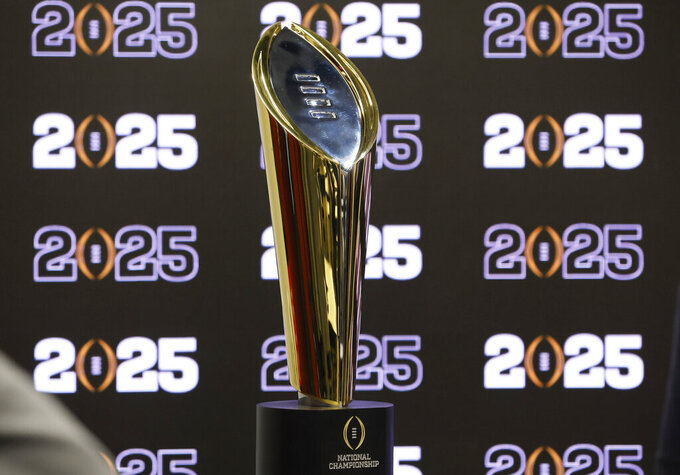 FILE - The National Championship Trophy is displayed following a news conference Aug. 16, 2022, in Atlanta, announcing that the CFP National Championship NCAA college football game will be played at Mercedes-Benz Stadium in 2025. The conference commissioners who manage the College Football Playoff met for almost seven hours Tuesday, Sept. 27, to work on expanding the postseason system from four to 12 teams as soon as the 2024 season. There is still much work to be done. (Jason Getz/Atlanta Journal-Constitution via AP, File)

ROSEMONT, Ill. (AP) — The administrators who've been given the task of expanding the College Football Playoff from four to 12 teams left their latest in-person meetings Wednesday with the biggest question unanswered: How soon?

“Making progress,” CFP Executive Director Bill Hancock said after the meetings near Chicago's O'Hare International Airport. “We all have to remember the College Football Playoff will expand. And that will be a good thing for the game. And we’re just trying to see if we can do it earlier.

“I think a lot of us feel like earlier is icing on the cake. We’re going to have our cake in 2026. Can we ice it now and start earlier?”

The CFP management committee is scheduled to convene again on Oct. 20 in Dallas. The members expect to get some work done before then by video conference, but whether the logistical hurdles can be cleared to implement a new format as soon as the 2024 season is unclear.

“There are a million details, but really encouraged by our ability to work through them,” said Notre Dame athletic director Jack Swarbrick, who is a member of the management committee along with the 10 FBS conference commissioners. “Lot of work to do, we'll see. But thus far nothing that causes you to say, ‘This is impossible.’”

Swarbrick said there is still no hard deadline for deciding whether the new format can be implemented in 2024.

“To dig in as much as we’ve dug in and not find something that causes you to say, ‘This can’t happen,’ it’s encouraging,” he said.

Hancock emphasized if expansion can't be done for 2024, that wouldn't rule out 2025.

Expanding the playoff early could be worth an additional $450 million in gross revenue from media rights for the schools that compete in major college football.

The additional revenue will require a tweaked plan for distribution between conferences and for participating teams.

“The good news is you have a model you’ve worked under for a long time,” Swarbrick said. “So you’ve got a starting point.”

Since a plan to expand to 12 teams was unveiled in the spring of 2021, and then snarled throughout the rest of the year by mistrust and provincialism, the commissioners have blown through several soft deadlines, hoping more time would bring consensus.

Expansion of the playoff for the 2024 and '25 seasons appeared off the table in February, but the university presidents and chancellors who oversee the CFP took matters into their own hands and revived the process.

By adopting the 12-team plan last month, the presidents directed the commissioners to try to implement a new format before the end of the CFP’s current contract with ESPN. That deal ends after the 2025 season.

The playoff will expand to 12 for 2026, with a new television contract that is likely to include multiple network partners. If expansion happens in 2024 and/or 2025, ESPN would have first crack at buying the rights to the additional games.

But expanding within the existing contract is trickier because agreements, dates and venues have already been set.

Atlanta was announced as the site for the championship game following the 2024 season. The game is set for Jan. 6, but would need to be pushed back about two weeks to accommodate a 12-team playoff. Same for the semifinals.

“We we hope for more progress,” Hancock said of the next meeting in October. “But I don’t want to mischaracterize it as a deadline.”

By Mark Anderson 30 minutes ago
2 hrs ago
By Gary B. Graves 4 hrs ago
4 hrs ago
By The Associated Press 8 hrs ago