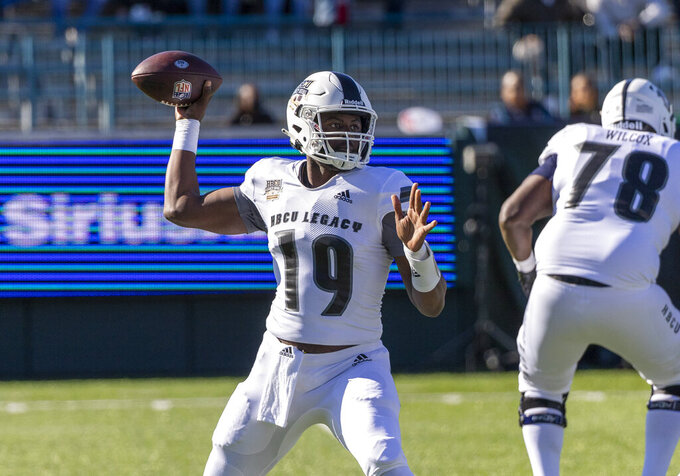 NEW ORLEANS (AP) — Tennessee State's Geremy Hickbottom began his final college football season by learning a new system with a new team and ended it by being named the top offensive player at the first All-Star game organized for players at historically Black colleges and universities.

Hickbottom accounted for 97 yards and a touchdown from scrimmage in three possessions, helping Team Gaither beat Team Robinson 22-6 in the inaugural HBCU Legacy Bowl on Saturday.

Hickbottom's approach centered on “taking what they give me, not trying to overdo it,” he said. "That’s when you get yourself in trouble. But just take what they give me a find a way to execute it.”

Hickbottom passed for 72 yards and rushed for 25, including a 3-yard touchdown dash around the right end.

The teams were named for two of the most prominent former head coaches at historically Black colleges and universities: Grambling's Eddie Robinson and Florida A&M's Jake Gaither.

“Throughout this week I just came in and told myself, ‘Learn the system fast, fit into the scheme and do your job,’ and that’s exactly what I did — and came out and competed every day,” said Collier, who previous played for UCF before an arrest led to his dismissal.

Collier thanked Florida A&M coach Willie Simmons — who coached Team Gaither at the Legacy Bowl — for giving him a second chance and said he arrived in New Orleans focused on “doing everything the right way.”

“You’ve got to talk like a pro. You’ve got to work out here like a pro,” Collier said. “I was being a leader on the field. I was trying to put everybody in a situation to make a play.”

Hickbottom, who played for Grambling in the spring of 2021 before transferring over the summer, passed for 1,847 yards and rushed for 261 net yards in 10 games for Tennessee State last fall. He entered the regular season on the heels of his recovery from COVID-19. His regular season ended when he was carried off the field on a stretcher with a bruised spine against Austin Peay on Nov. 13.

But he was deemed fit to play in the Legacy Bowl and drove his unit into field goal range on the opening series. Virginia Union kicker Jefferson Souza sailed his 51-yard field goal attempt wide left, however.

Wilkins opened scoring when he caught a pass from Witt in the right flat and ran around the end.

Extra points were kicked from the NFL distance (snapped from the 15-yard line and kicked from about 33 yards). Souza missed his first and Team Gaither led 6-0 at halftime.

Witt, who came on to start the second quarter and led another series in the fourth quarter, was 15 of 21 for 131 yards. He completed seven of eight passes for 66 yards on his touchdown drive. This season, Witt passed for 2,864 yards and 31 TDs in 10 games for Division II Chowan.

Souza gave Team Gaither a 9-0 lead with a 21-yard field goal set up by a turnover. Fort Valley State receiver Sehmar Bridges fumbled after a short pass on which he went to the ground to make the catch, but then got up and ran — an allowable move in a game played largely by NFL rules.

Bowie State linebacker Wesley Bowers forced the fumble on the Team Robinson 29. Virginia State defensive end Javon Frazier scooped up the ball and returned it to the 3.

After Hickbottom's touchdown run in the fourth quarter, Souza made the extra point for the final score.

The game was the brainchild of former NFL quarterbacks Doug Williams and James “Shack” Harris, who both played at Grambling. They wanted improve exposure for top Black college players to pro scouts during a week of activities that included meet-and-greets at a downtown hotel and practices.