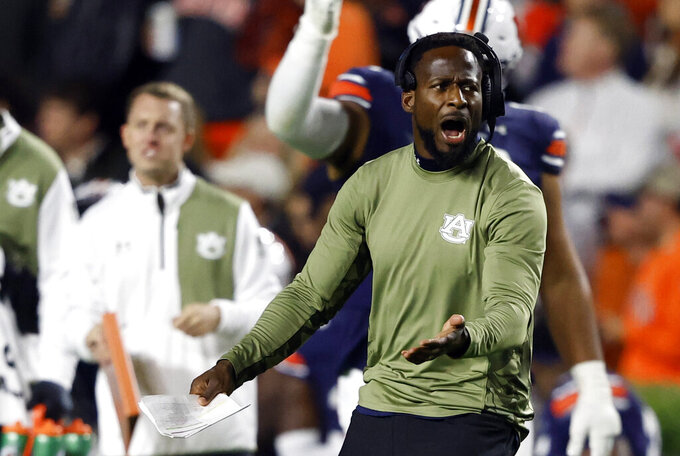 Carnell “Cadillac” Williams has been the Iron Bowl hero for Auburn before.

Now, the former All-America tailback is trying to do it again. Not by piling up rushing yards like he did 19 years ago against Alabama, but by making the right calls from the sidelines and saying the right things in the locker room.

Williams has already energized Auburn's team and fan base heading into Saturday’s game with the No. 8 Crimson Tide in Tuscaloosa having gone from five straight losses to a two-game winning streak.

The 2005 NFL rookie of the year, who had been Auburn's running backs coach, took over as interim coach on Oct. 31 when Bryan Harsin was fired.

Williams will become the first Black head coach in the Iron Bowl.

“It didn't even hit me, honestly, until I saw it this morning,” he said Monday. “And I was like, 'Wow, that's pretty cool.'”

What was shaping up as a disastrous season has at least had an infusion of positives.

Auburn lost to Mississippi State in overtime in Williams’ first game in that role, but has since beaten Texas A&M and Western Kentucky to stay alive for bowl eligibility.

“He’s done a great job — the energy, the enthusiasm, the way the guys are competing and playing, the way they play to win,” Tide coach Nick Saban said. “And that was his personality as a player.”

Williams, who ran for 204 yards in the 2003 Iron Bowl, has been a unifying force off the field with an unpretentious, folksy manner — he stepped to the podium with an “Oh, Lordy, Lordy. Wow” after the Western Kentucky win.

New athletic director John Cohen is more likely to turn the program over to someone more established and proven, and Williams seems OK with that.

“I don’t know. I really don’t care,” Williams said. “My seat doesn’t dictate my service. Auburn’s special and those kids are special.”

Williams is clearly the rookie in a matchup against Saban, a seven-time national champion coach who tried to recruit him to LSU.

Williams only had five carries in the first two games against Alabama because of injuries. Then, he broke loose for an 80-yard touchdown run on the first play to spark a 28-23 Auburn win in 2003 that helped coach Tommy Tuberville keep his job. He still calls it one of his most memorable plays.

Former Auburn quarterback Jason Campbell knew Williams "was taking on a situation that was pretty rough.” Campbell noted that he benched starters for the Mississippi State game because they showed up late to meetings and also cracked down on class attendance and punctuality.

"It was definitely a perfect fit,” Campbell said. “Think about it ... if you turned to anybody else during this that wasn’t an Auburn person, where we felt like we were drowning a little bit, you could set your program back years.

“Now not only did you get someone that played there, you got someone that’s well respected in that locker room by the players and the other coaches and you got somebody that the fan base loved.”

Campbell, who works on Auburn’s radio broadcasts and with the NIL collective, helped lead the Tigers alongside Williams to an unbeaten record and No. 2 final ranking in 2004.

Now, former teammates have rallied around Williams and his team. More than 30 of them attended the Texas A&M game, his first as head coach at Jordan-Hare Stadium, and were brought into the locker room beforehand.

The “Go Crazy” shirt carried many Auburn fans “back down memory lane” to one of the program's best seasons, Campbell said.

Former Auburn defensive lineman Bret Eddins describes Williams as “kind of an aw shucks guy” and thinks that's one reason why Auburn fans and players have rallied around Williams so much.

“That’s just who he is," said Eddins, who lives in Auburn and is a season ticket holder. “He’s humble. He works hard. He loves Auburn. He loves these kids. He really wants to see these kids be successful.”

In Alabama, that can start with beating the Tide.