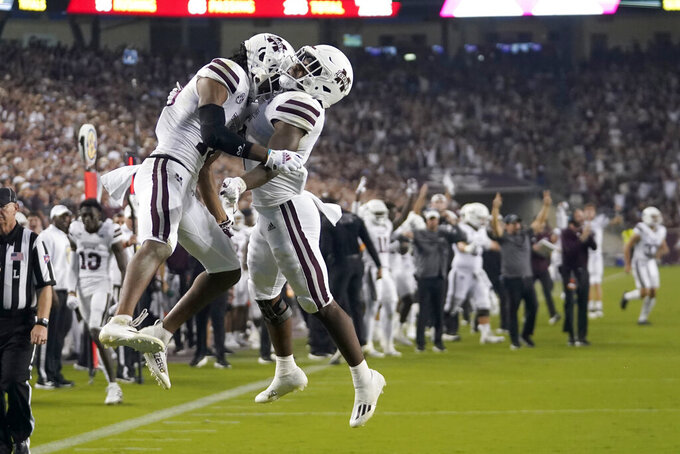 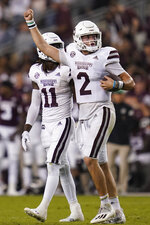 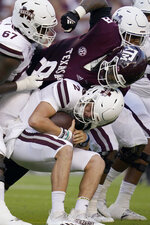 COLLEGE STATION, Texas (AP) — Desperate for a boost after consecutive close losses, Mississippi State found a huge one by knocking off the 15th-ranked Texas A&M on Saturday night.

Will Rogers threw for 408 yards and three touchdowns and Nathan Pickering sacked Zach Calzada in the end zone late for a safety in Mississippi State's 26-22 victory.

“It’s always good to win at Kyle field and I've done it more than most people have," said coach Mike Leach, who improved to 4-2 in College Station.

Rogers hopes the win can propel the team to more success this season.

“I think we’re doing special things," he said. “I think the program’s going in the right direction and tonight was a huge step toward that."

Rogers was sacked twice, and the Bulldogs had two false start penalties that backed them up before Nolan Mccord’s 49-yard field goal attempt sailed wide right with about eight minutes to go.

The Aggies cut the lead to two on a 44-yard field goal by Seth Small about two minutes later.

Texas A&M (3-2, 0-2 Southeastern Conference) forced a punt to get a chance to take the lead. But Calzada, a backup in his third start, was taken down by Pickering on third down for the safety to extend the lead to 26-22 with about two minutes to go, and the Bulldogs ran out the clock to secure the victory.

“We played together," Leach said. “Hung in there. Didn’t struggle with the emotional ups and downs."

Polk was asked about the key to the game.

It’s the second straight loss for the Aggies after they won their previous 11 games and is a huge blow to a team that entered the season with national championship hopes.

Texas A&M gave up a season-high in points as coach Jimbo Fisher and the Aggies struggled to contain Leach's Air Raid offense. Things only get tougher for the Aggies next week with a visit from top-ranked Alabama coming next Saturday night.

“We've got to play better," Fisher said. “In those games where every possession matters, every play matters, we've got to execute better.”

Calzada threw for 135 yards with a touchdown and an interception and Isaiah Spiller ran for 100 yards for Texas A&M.

“I thought Zach grew up and made some really good plays at times," Fisher said. “A couple things he’s got to get cleaned up. But he’s growing."

Polk’s second touchdown came on a 20-yard reception that extended the lead to 24-13 with about seven minutes left in the third quarter. Jaylon Jones was covering him but tripped and fell just before the ball arrived to leave Polk open for the score.

Calzada scrambled 25 yards for a touchdown with just more than a minute left in the third quarter, but his 2-point conversion attempt was broken up to leave the Aggies down 24-19.

Things went wrong for the Aggies early in this one. Fred Peters grabbed an interception after Calzada’s first pass was deflected. But the Bulldogs couldn’t move the ball and settled for a 24-yard field goal.

The Aggies took a 7-3 lead when Calzada threw an 11-yard TD pass to Jalen Wydermyer with about 9 1/2 minutes left in the first quarter.

Rogers found Jaden Walley for a 1-yard score later in the first to put Mississippi State on top 10-7.

The Aggies added one field goal early in the second quarter and a second one put them on top 13-7 with about three minutes left in the first half.

Polk made a nice grab in the corner of the end zone for a 15-yard touchdown that gave the Bulldogs a 17-13 halftime lead.

The Aggies could be in for a long night next Saturday against powerful Alabama after struggling against lesser opponents in these two losses.

“You play every week to be a good football player, a good team and to win the game," Fisher said. “We have to line up each week and play a good game and see where the year takes us.”

Jackie Sherrill, who coached at both Texas A&M and Mississippi State, walked in near the end of Leach's postgame news conference to congratulate him on the win.

“Coming in here and winning is a big deal," Sherrill said.

The Aggies will plummet in the poll and might even drop out altogether after consecutive losses.