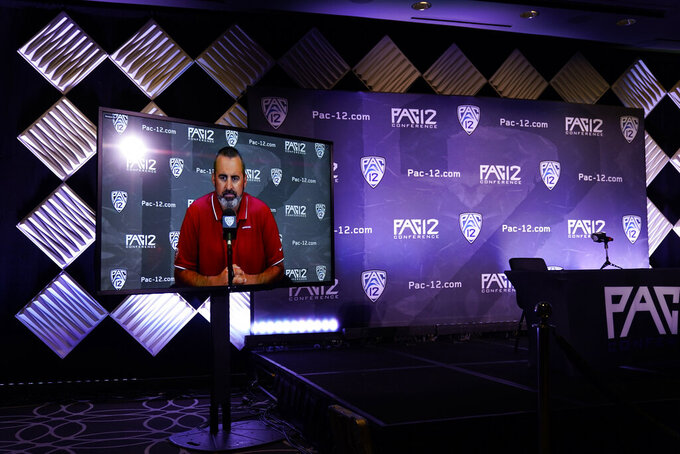 LOS ANGELES (AP) — Washington State coach Nick Rolovich lamented Tuesday that his decision to not get the COVID-19 vaccine has created a distraction for his program, though he reiterated that he would keep his reasons why private.

“I don’t mean to cause any heartache to this university or to this athletic department or this state,” Rolovich said via Zoom during Pac-12 media day. "As I go forward, I plan on adhering to all policies that are implemented for the unvaccinated at the state, local, campus and conference level. I’m not against vaccinations. I wholeheartedly support those who choose to be vaccinated, including our players, staff, and coaches.”

Rolovich was the only conference coach not at the W Hollywood Hotel for media day, where proof of vaccination was required for those in attendance. He said talks with the athletic department have been good and that “they respect my decision.”

Rolovich said 75% of his team has received at least one shot. Washington State is one of nine Pac-12 schools requiring students and staff to be vaccinated for the upcoming academic year, with certain exceptions. Arizona, Arizona State, and Utah are currently not mandating it.

If Washington State grants an exemption for Rolovich, he would have to wear a mask on campus at all times and abide by social-distancing protocols.

Washington State President Kirk Schulz wrote on the school’s website last week after Rolovich’s initial announcement that he expects all students and campus personnel to be fully vaccinated.

Washington Gov. Jay Inslee has asked to speak to Schulz and university leadership about the situation.

The issue has divided fans. Some have called for his dismissal while others have praised Rolovich’s decision to express his individual choice. Rolovich is entering his second season at Washington State after eight seasons at Hawaii, with the last four as head coach.

The Cougars were 1-3 last season and had three games canceled due to positive COVID-19 tests and contact tracing. Two were due to the program not having a minimum of 53 scholarship players available.

Running back Max Borghi and linebacker Jahad Woods said they supported their coach’s decision and that it would not be a distraction.

“I don’t think there are any concerns. We know what he thinks about us and how much he truly cares,” Borghi said.

Pac-12 Commissioner George Kliavkoff said he has not talked to Rolovich but did discuss the matter with Washington State athletic director Patrick Chun.

Kliavkoff said the conference is still discussing what its policy would be if games have to be postponed due to COVID-19 cases. An announcement will be coming in the next two weeks.