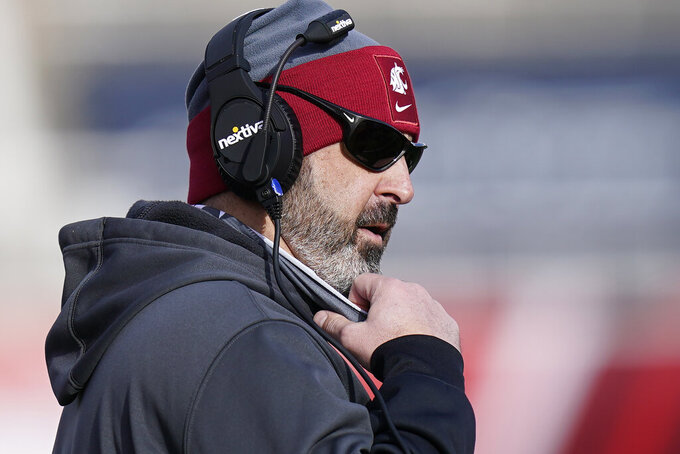 FILE - Washington State head coach Nick Rolovich looks on during the first half of an NCAA college football game against Utah in Salt Lake City, in this Saturday, Dec. 19, 2020, file photo. Rolovich has become the story of Pac-12 media day even though he won't be in attendance. Rolovich's announcement last week he has chosen not to receive a COVID-19 vaccination has divided his fan base and seemingly his school as one of the colleges requiring students and staff to be vaccinated before the start of classes this fall. (AP Photo/Rick Bowmer, File)

Many colleges across the country are telling students a COVID-19 vaccination is required if they want to attend classes on campus during the upcoming academic year.

But what happens when one of the most influential voices on campus and the second-highest paid state employee appears to be defying the requirements put in place by his own school, drawing criticism from alums, campus staff and even the governor?

That’s the situation facing Washington State after football coach Nick Rolovich announced last week that he made the personal decision not to receive a COVID-19 vaccination. He revealed his decision as part of an announcement that he would not be attending Pac-12 media day, where proof of vaccination is required, on Tuesday in Los Angeles.

Rolovich declined to explain, citing “reasons which will remain private.” But the lack of clarity coupled with Washington State’s requirement for students and staff to be vaccinated prior to the start of the school year — with certain exemptions — has set off a firestorm around the Cougars program and will make Rolovich the center of attention during an event that he’ll be attending virtually.

“Anybody in a leadership position in the state of Washington, I believe, has an obligation to lead and use their leadership position to save lives,” Gov. Jay Inslee said last week. Inslee has requested to speak with university leadership about the situation to gather more information. “Governors, senators, football coaches. Help lead. Lead the effort to defeat COVID.”

The situation with Rolovich is a tenuous balance between personal choice and school mandates. Washington State has said all students and stuff must be vaccinated. If the school permits an exemption, the person must wear a mask at all times on campus and abide by social-distancing protocols.

So in the case of Rolovich, he would have to conduct practices, meetings and visits with recruits, donors and others under those stipulations.

“Washington State University expects all students, faculty, staff and volunteers to be fully vaccinated before the start of the fall semester,” Washington State President Kirk Schulz wrote on the school’s website last week after Rolovich’s announcement. “As the state’s land-grant research university, WSU has an obligation to serve the public good and promote the health and safety of its communities. The science clearly shows that the COVID-19 vaccine nearly eliminates the chances of death or serious illness related to a COVID-19 infection and is a critical element in protecting public health locally and worldwide.”

Rolovich's decision has stoked divisions among the Washington State fan base, with some calling for his dismissal and others praising Rolovich’s decision to express individual choice.

No matter the view, it has put his players attending Pac-12 media day — Max Borghi and Jahad Woods — in the awkward position of likely having to answer as many questions about their head coach as about the upcoming season.

Washington State is one of 23 Power Five conference programs that have vaccination policies for the upcoming academic year. Nine of those 23 are in the Pac-12, with Arizona, Arizona State and Utah the outliers. Six of those requiring vaccinations are in the Big Ten (Northwestern, Illinois, Indiana, Maryland, Michigan, Rutgers); six are in the ACC (Boston College, Syracuse, Duke, Wake Forest, Virginia, Virginia Tech), along with Notre Dame; and the SEC has one (Vanderbilt).

Several coaches at schools without vaccination mandates have been proponents for getting vaccinated, including Alabama’s Nick Saban, who has filmed public service announcements.

West Virginia coach Neal Brown said at Big 12 media day that he got vaccinated “as soon as I could.”

“My wife the same,” Brown said. "The moment West Virginia opened it up to 13-year-olds my daughter was in line that day. Both my parents, my in-laws. And so those are my personal feelings. I’m not necessarily pushing my personal feelings to our student-athletes. They’ve got to make their own decisions. Now what we try to do is we try to educate them, get medical experts to talk to them.”