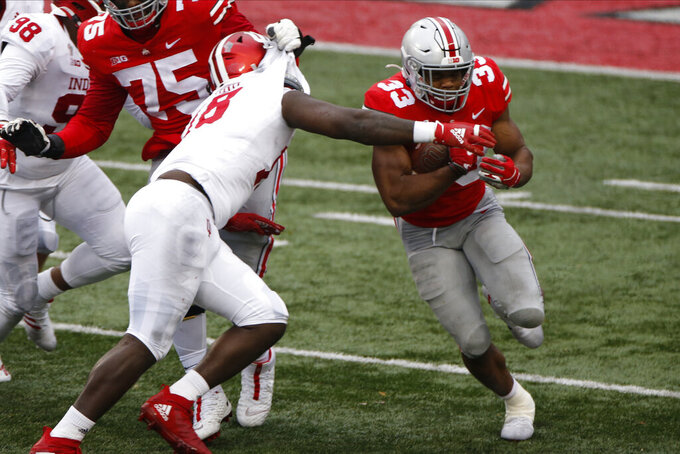 — Desmond Ridder, Cincinnati, accounted for five TDs and 395 yards and the No. 7 Bearcats beat Central Florida 36-33 to head into the release of the first College Football Playoff rankings unbeaten.

—JT Daniels, Georgia, threw for 401 yards and four TDs as the No. 13 Bulldogs held on for a 31-24 victory over Mississippi State.

—Kenny Pickett, Pittsburgh, threw for 404 yards and two TDs, and ran for another in his final start at Heinz Field as the shorthanded Panthers rolled past Virginia Tech 47-14.

—Spencer Rattler, Oklahoma, passed for 301 yards and four TDs, and ran for another score to help the No. 18 Sooners beat No. 14 Oklahoma State 41-13 to boost their hopes of winning a sixth straight Big 12 championship.

— Tristan Gebbia, Oregon State, became the first Pac-12 quarterback since 1996 to pass, run and catch a touchdown in the Beavers’ 31-27 victory over California.

—Kyle Trask, Florida, passed for 383 yards and three TDs, and the No. 6 Gators rallied from an early deficit to beat Vanderbilt 38-17.

—Smoke Monday, Auburn, returned an interception 100 yards for a TD and the No. 23 Tigers overcame a slow start to beat Tennessee 30-17.

— Alonzo Booth, Eastern Kentucky, ran for 178 yards and three touchdowns, and caught another in a 49-17 win over Western Carolina.

—Sincere McCormick, UTSA, ran for 173 yards and TDs in a 23-20 victory over Southern Mississippi.

After climbing to its highest AP Top 25 poll ranking in more than a half century, No. 9 Indiana got a chance find out how it measured up with Big Ten behemoth Ohio State, a team the Hoosiers hadn’t beaten in 32 years.

They came up short but sure made it interesting — and a lot closer than the No. 3 Buckeyes would have liked.

Behind quarterback Michael Penix Jr., Indiana (4-1) rallied from a four-touchdown deficit in the second half only to be outlasted by the Buckeyes 42-35 in an all-but-empty Ohio Stadium.

The Buckeyes were happy to get out of there with a win after leading 35-7 early in the second half and allowing Indiana to climb back to within one score. Two weeks ago, Ohio State led 35-3 at halftime and were outscored 24-14 in the second half in a win over Rutgers.

5_Losses without a win to start the season by Penn State, the worst start in a program that began playing in 1896.

24_Years since No. 19 Northwestern last started Big Ten play 5-0 before this season.

96_Years since Illinois won at Nebraska before beating the Cornhuskers 41-23 in Lincoln.

For most teams that come into Memorial Stadium, beating Nebraska doesn’t mean as much as it used to considering the Cornhuskers’ fall from the upper echelon of college football the last two decades.

You couldn’t tell that to Illinois coach Lovie Smith after his team beat the Cornhuskers 41-23 for their first win in Lincoln since 1924 .

Brandon Peters threw for one touchdown and ran for another in his first game in nearly a month, Illinois had two rushers go over 100 yards, and the Illini beat the turnover-plagued Huskers for their second straight win.