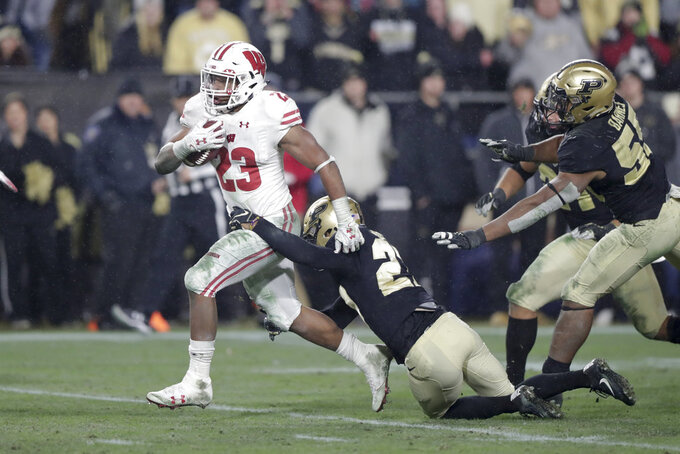 —Jonathan Taylor, Wisconsin, rushed for a career-high 321 yards and scored three times, including the decisive 17-yard run in triple overtime, to give the Badgers a 47-44 comeback victory at Purdue.

—Joshua Kelley, UCLA, ran for 289 yards on 40 carries and scored two touchdowns to lead the Bruins past USC 34-27.

—Tua Tagovailoa, Alabama, passed for 340 yards and three TDs to help the No. 1 Crimson Tide pull away from The Citadel for a 50-17 victory.

—Colin McGovern, Stetson, threw for school records of 498 yards and six TDs in a 45-31 win over Valparaiso.

—John Lovett, Princeton, passed for 255 yards and three touchdowns, rushed for 123 yards and a score in a 42-14 victory over Pennsylvania that clinched its first perfect season since 1964.

—Pierre Strong Jr., South Dakota State, ran for 253 yards and three TDs on 17 carries to lead the Jackrabbits to a 49-27 victory over South Dakota.

—Kenny Pickett, Pittsburgh, threw for career-highs of 316 yards and three TDs as the Panthers beat Wake Forest 34-13 to clinch their first berth in the Atlantic Coast Conference championship game.

—Kenji Bahar, Monmouth, threw for a career-high 407 yards and five TDs in a 56-42 victory over Gardner-Webb.

—Jake Maier, UC Davis, threw for 478 yards and four TDs, and the Aggies claimed a share of its first Big Sky Conference title with a 56-13 victory over Sacramento State.

—Harris Roberts, Furman, threw five TD passes in a 35-30 victory over Mercer on Saturday to clinch a share of the Southern Conference title.

Relentlessly zipping up and down the field, ninth-ranked Ohio State and upstart Maryland were racking up yards and points at a dizzying pace.

Finally, the Terrapins were presented with the chance to end it — one way or another.

A gutsy decision by Maryland interim coach Matt Canada did not achieve the desired results, and the Buckeyes avoided one of the most stunning upsets in this college football season by squeezing out a 52-51 victory in overtime.

After a 5-yard touchdown run by Dwayne Haskins gave the Buckeyes a seven-point lead to start overtime, Tayon Fleet-Davis scored for the Terrapins. Canada opted to keep his offense on the field to attempt a 2-point conversion, and Tyrrell Pigrome's pass to Jeshaun Jones was off target.

Favored by 14 1/2 points, Ohio State trailed by two touchdowns in the third quarter and 45-38 with under two minutes left before rallying.

The victory kept the Buckeyes in the hunt for the Big Ten title and a spot in the College Football Playoff. Ohio State concludes the regular season next week in a game against Michigan that will decide the Big Ten East winner.

56_Years since Columbia had consecutive winning seasons before this year.

72_Points scored between Harvard and Yale, most in the 143-year history of The Game.

122_Years since Illinois set the all-time mark for margin of defeat, matched by its 63-0 loss to Iowa.

No. 1 Alabama finally found a team that could play toe to toe with the Crimson Tide, at least until halftime.

The surprise twist: It was The Citadel, an FCS team, not a Southeastern Conference rival.

Tua Tagovailoa passed for 340 yards and three touchdowns, but the Tide struggled for 30-plus minutes before putting away The Citadel in a 50-17 victory.

Alabama, which had coasted against SEC opponents, went into halftime tied at 10 with the Bulldogs. It wasn't until 'Bama scored two touchdowns in a 12-second span on its way to a 27-point third quarter that the Tide could rest easy.