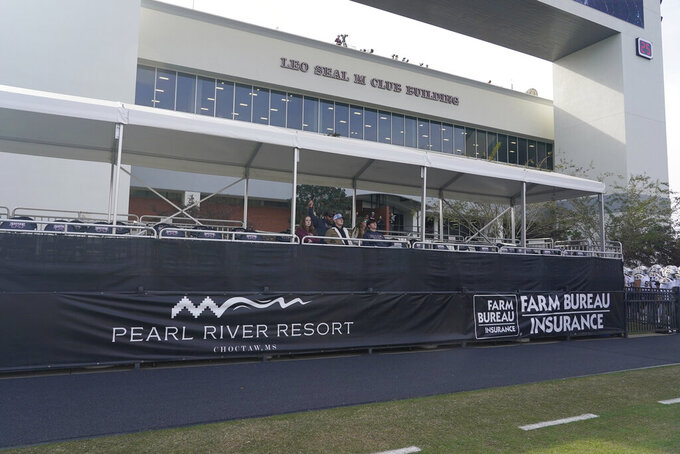 Early arriving fans occupy take their seats in one of the 18 loge boxes in Mississippi State’s south end zone, Saturday, Nov. 19, 2022, prior to an NCAA college football game against East Tennessee State in Starkville. The end zones are not necessarily where you will find the cheap seats anymore at college football games. Several colleges have tried making end-zone seating more attractive by turning it into a premium experience that includes such amenities as access to indoor clubs with expanded food and beverage options. (AP Photo/Rogelio V. Solis)

Wisconsin season-ticket holder Kim Heiman had heard all the stories about the drawbacks of sitting in end zone seats.

He realized the potential viewing obstructions that come from sitting behind a goal post. But when he saw Wisconsin’s plan to turn the south end zone into a premium experience, Heiman bought a package.

Now he believes he has one of the best seats in the house.

“When you get a chance to sit in these seats and look at the field view we have from here, it’s an excellent view,” Heiman said. “There’s nobody obstructing your view. You can see every play develop. It’s fantastic.”

“The days of the cheap seats right on the end zones with poor views have now changed dramatically,” said Sharianne Walker, who teaches a course in stadium and arena management as a professor of sport management and dean of the college of business at Western New England University. “It’s more of a premium seating opportunity.”

Turning such seats into premium experiences helps colleges appeal to fans at a time when it’s increasingly difficult to attract spectators. Average attendance for Football Bowl Subdivision games has dropped every year since 2014 and fell to 39,848 last season, its lowest since 1981.

Seats in the end zones traditionally are tough to sell.

“When you find there might be distressed inventory — seats not selling or not at the level the university would want — you find out what creatively you can do with that space so you still create a great home-field advantage,” Arkansas deputy athletics director of external engagement Rick Thorpe said.

Wisconsin senior associate athletic director Jason King said fan surveys revealed a need for premium seating opportunities giving spectators the option to stay outside rather than spending the entire game in a suite.

“That would allow people to have the amenities of premium space but still be in the bowl and enjoy the traditions that kind of make our stadium really special,” King said.

Wisconsin removed 7,190 standard end zone seats and replaced them with 2,734 seats that could be sold at higher prices. Fans there have wider seats with more legroom, dedicated restrooms and access to expanded food and drinks in an indoor club area.

Prices for season packages run from $700 for standing-room patio access to $4,500 per person for the top-of-the-line boxes that seat four to six people each. Field-level boxes get fans as close to the action as possible.

Wisconsin officials said they sold out all 2,734 seats to bring in $6 million in revenue.

Arkansas performed a $160 million renovation of Donald W. Reynolds Razorback Stadium in 2019 that included a north end zone addition with 70 loge boxes, 32 suites and about 2,400 club seats. Fans with indoor club access can watch the Razorbacks walk from the locker room to the field before the game.

Mississippi State’s south end zone has 18 loge boxes seating six people each that cost $10,000 per box and offer access to an indoor fieldhouse with a full-service buffet. Fans who already have tickets for seats elsewhere in the stadium can pay an extra $850 per year to access a field-level club with an outdoor terrace allowing them to stand in the back of the north end zone.

Walker noted the indoor clubs that come with many of these premium end zone seats provide a sports-bar type of atmosphere.

“You think about younger alumni coming back,” he said. “They may not be able to quite afford the suite yet, but maybe they can afford the end zone premium seating and they can visit their buddies and network.”

Richey said Mississippi State’s suites on the east side of the stadium cost $50,000 per year and fit up to 30 people. The premium end zone seats still offer indoor club access at a lower price.

“What we’ve discovered over the last eight or 10 years is everybody has a different expectation about what their viewing experience is going to be and how they’re going to enjoy the event,” Richey said. “For some people, especially younger folks, it’s not so much about, ‘I want to be on the 50-yard line’ or ‘I want to be lower level,’ or ‘I want to be at a certain place.’ It’s more about the social aspect. It’s more about having room to move and not be tied down to a 22-inch piece of metal on a bleacher.”

It’s also about having the opportunity for indoor access, particularly at northern stadiums where weather becomes an issue.

“We have hot weather in September and cold weather in November, so most of the season there’s a reason to go inside,” said Iowa State senior associate athletics director Ryan McGuire, whose school opened its south end zone club in 2015.

Yet there’s still the matter of making sure the packages offer good views of the action.

Richey says fans like the loge boxes at Mississippi State because they’re close enough to the field that players can hear what those spectators are saying. At Wisconsin, Heiman got a 3D presentation from school officials showing the favorable perspective he’d have from his seat.

Heiman says he got everything he was promised.

“You can sell these seats for premium dollars, for the luxury that you have in them,” Heiman said.