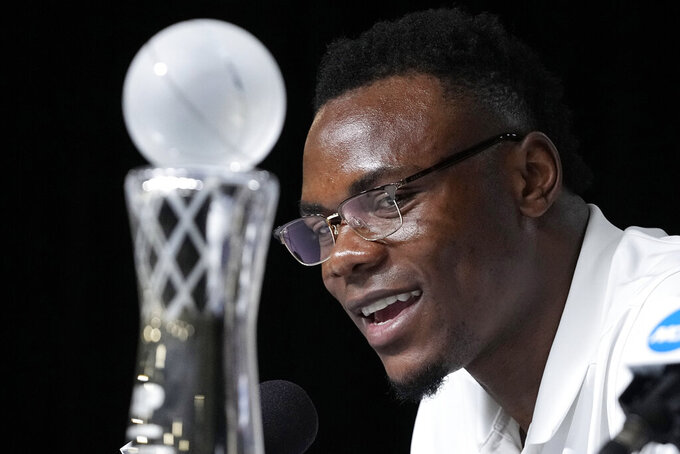 FILE - Kentucky NCAA college basketball player Oscar Tshiebwe speaks as he is introduced as The Associated Press men's basketball player of the year, in New Orleans, Friday, April 1, 2022. Kentucky coach John Calipari says on social media that consensus national player of the year Oscar Tshiebwe will have a “minor” 15-minute procedure to “clean some things up” in his knee. Calipari did not specify in a Twitter post on Tuesday, Oct. 11, 2022, which knee will be treated. (AP Photo/Gerald Herbert, File)

BIRMINGHAM, Ala. (AP) — Kentucky coach John Calipari is long accustomed to being judged by how far his teams advance in the NCAA Tournament.

The Southeastern Conference, and some of its other flourishing programs, can now relate. Teams like Kentucky, former No. 1 Auburn, Tennessee, LSU and Alabama made quicker-than-expected exits last season, with the league's March fortunes salvaged by Arkansas' second straight Elite Eight run.

The most notable upset was the second-seeded Wildcats' overtime loss to No. 15 seed Saint Peter's in the first round. But only the Razorbacks survived the opening weekend, while the other five SEC teams lost to double-digit seeds.

“I had to worry about my own team, for mental health and not going in dark places and meeting, sitting and hugging,” Calipari said Wednesday at SEC media day. "I mean, that was ridiculously hard for our guys because we did have a good year. We had a bad finish.

“I would say we’re all judged by how you do in that tournament.”

The league has only sent two teams to the Final Four since Kentucky’s last appearance in 2015, and one school (South Carolina) has already fired the coach responsible. SEC teams are a combined 12-12 in the NCAA Tournament the past two seasons, with the Razorbacks accounting for half of those wins.

There's no questioning the talent, with key transfers and a slew of highly rated recruits joining the mix. The SEC and Big 12 led the way with five teams apiece in the preseason Top 25.

Kentucky is fourth, Arkansas 10th, Tennessee 11th, Auburn 15th and Alabama 20th. Now, it's just a matter of surviving and advancing in the NCAA Tournament when it's one-and-done.

Calipari, who took over at Kentucky in 2009, has seen the SEC make big strides in basketball during his tenure, with schools investing in everything from facilities to coaching salaries to recruiting budgets.

“Now, the problem is when they really invest, you’ve got to win,” Calipari said. "Not everybody is going to win. If you don’t win, you’ve got a lot of change. But that’s part of it.

“There’s been great investment in basketball, and like I always say, be careful what you wish for sometimes, because now it just changed things. You were under the radar, you’re fine; now all of a sudden, no, you’re in the same boat as all of us.”

That means making it to the NCAA Tournament, and sticking around for a while more often.

“It’s a one-shot deal and in 40 minutes when you’re dealing with young people believe me, anything can happen," Tennessee coach Rick Barnes said. “We’ve seen teams catch lightning in the bottle.”

The third-seeded Volunteers made it to the second round last March before falling to No. 11 Michigan. LSU, Alabama and Kentucky fell in the first round.

No. 2 seed Auburn, which had topped the rankings for the first time during the season, fell to No. 10 Miami in the second round. That led Tigers coach Bruce Pearl to predict the SEC would — unfairly, he felt — “get crushed for our tournament performance.”

Pearl, who led Auburn to the 2019 Final Four, said the grind of playing in the SEC can take a toll on teams come March.

“I’m not going to make any excuses for last year, but I think when you get in a great league ... there’s a grind in that league," Pearl said. “Sometimes, you look at football. To go through SEC football, every single weekend there are no weekends off in SEC football.

“There aren’t many off in SEC basketball. There are other Power Five leagues, there are a couple of weekends off.”

He cited the ACC last season, when Duke and North Carolina both made the Final Four and Miami — which knocked the Tigers off — got all the way to the Elite Eight.

“What a run they had,” Pearl said. “The league wasn't as good top to bottom. So I think some of the best teams in that league were pretty excited about getting into that tournament, and they showed it.”

Arkansas, meanwhile, has made it to the Elite Eight two years running. Musselman has reloaded with transfers and a recruiting class that boasts three five-star prospects and is ranked No. 2 nationally in the 247Sports composite ratings.

Musselman doesn't put much stock in the “irrelevant” preseason rankings and predictions.

“What I do know is we have two players that have put on Arkansas Razorback uniforms and 11 guys that have not,” he said.

Now, the teams can start with a clean slate. If only reporters will stop bringing up last season, including the Saint Peter's upset.

“I’m over it. The only time I talk about it is when one of you guys ask about it,” Kentucky point guard Sahvir Wheeler said. “I’m over it. I’m waiting on you guys to get over it.”