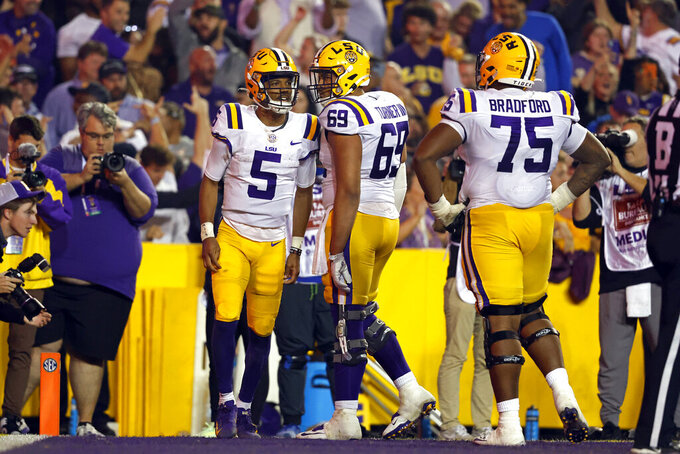 A look at Week 11 in the Southeastern Conference:

Now in third place and likely out of contention in the West Division, Alabama is a half-game behind the Rebels and favored in this one. The Tide has won six straight against its border rival and the past five by an average margin of 58-22. Alabama’s two losses have come by a total of four points, including last week’s 32-31 overtime loss at No. 6 LSU. They still feature a formidable duo in Heisman Trophy-winning quarterback Bryce Young (2,234 yards passing, 19 touchdowns) and linebacker Will Anderson Jr. (seven sacks). Ole Miss have the SEC’s No. 3 offense at nearly 495 yards per contest and its No. 4 scoring outfit at 37.4 points. QB Jaxson Dart (1,911 yards, 14 TDs) and freshman back Quinshon Judkins (664 yards, four TDs) are the main weapons. The Rebels allow 378 yards and 21 points per game but must step up their game against a Crimson Tide unit that can score and is hungry to bounce back from losing to the Tigers.

Georgia cooled off then-No. 2 Tennessee in last week’s 27-13 showdown and must slow another high-octane scheme in MSU’s pass-oriented Air Raid. Record-setting MSU junior Will Rogers (323.6 yards per game ) leads the SEC in passing but faces the SEC’s stingiest defense in yardage allowed (256.6 yards) and scoring (10.78 points). Georgia QB Stetson Bennett (289.6) is next and looks to follow up an all-around performance against the Volunteers featuring 247 yards and two TDs passing along with a 13-yard scoring run.

Georgia senior kicker Jack Podlesny shares the SEC scoring lead with 92 points and ranks sixth nationally. He has made all 44 extra point attempts and 16 of 18 field goals. That included three PATs and both field goal tries against Tennessee, including 38-yarder. Podlesny has converted 51 of 61 FGs in his career and ranks sixth all-time at Georgia with 306 points.

No. 7 LSU (7-2, 5-1, No. 7 CFP) must avoid a trap to stay on the playoff radar when it visits Arkansas (5-4, 2-3) on Saturday in the Battle for the Golden Boot. The host Razorbacks seek consecutive wins over the Tigers for the first time since 2014-15 and look to become bowl eligible for the third year in a row. LSU is favored by 3 according to FanDuel.com Sportsbook.