SEC standouts who returned for more finding success so far 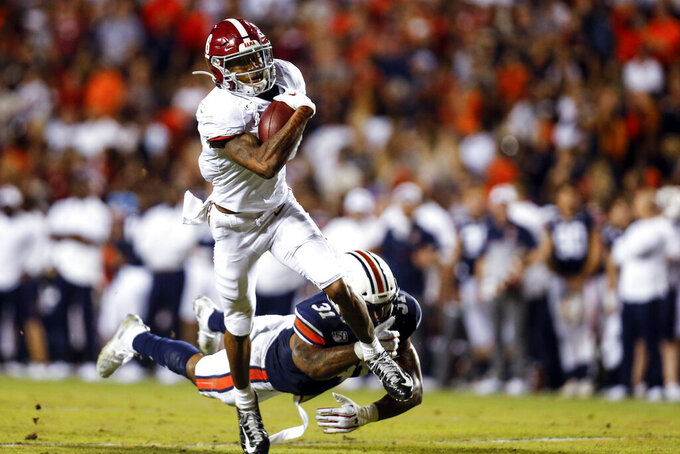 FILE - In this Nov. 30, 2019, file photo, Alabama wide receiver DeVonta Smith (6) catches a pass as Auburn linebacker Chandler Wooten (31) tries to tackle him during the second half of an NCAA college football game in Auburn, Ala. DeVonta Smith could be tearing up the NFL instead of the Southeastern Conference. The Alabama standout has 38 receptions for 483 yards and four touchdowns in four games. (AP Photo/Butch Dill, File)

DeVonta Smith could be tearing up the NFL instead of the Southeastern Conference.

The Alabama standout has 38 receptions for 483 yards and four touchdowns in four games, including consecutive performances in which he topped 160 yards while helping the second-ranked Crimson Tide score a combined 104 points.

Even Georgia’s NFL-ready secondary looked ill-equipped trying to cover him.

It showed what many already knew: Smith could have turned pro in January, joining fellow SEC receivers Henry Ruggs, Jerry Jeudy and Justin Jefferson in leaving early, and would be doing just fine at the next level.

But Smith chose to stay in school after the Tide failed to reach the College Football Playoff for the first time in his three seasons and then shunned thoughts about opting out amid the coronavirus pandemic.

He’s not alone, either. Other SEC players also delayed NFL riches and essentially gambled on themselves. There's no senioritis here. Most of them have enjoyed early season success, just not as much as Smith has in Tuscaloosa:

— Feleipe Franks, Arkansas. Working out for NFL teams wasn’t a viable option for the strong-armed quarterback after he broke his right ankle in September 2019. But there were reports he might go play baseball after leaving Florida. He stuck to football, transferred to Arkansas and has been instrumental in the team’s 2-2 start. His eight touchdown passes are already more than any Arkansas QB threw last year.

— Najee Harris, Alabama. The running back already has 11 touchdowns. The 6-foot-2, 230-pound senior ran for 206 yards and five scores at Mississippi. He followed that with 152 yards and a touchdown on 31 carries against Georgia. The Bulldogs hadn’t allowed a rushing score and entered the game allowing a nation-leading 38.3 yards a game on the ground.

“All of us are creating more value for ourselves by winning each game because when you win a game it brings a lot of national notoriety -- all the players, not just one particular player," Harris said after his five-TD day.

— Alex Leatherwood, Alabama. The 6-foot-6, 312-pound left tackle has started 32 consecutive games and anchors a line that’s the building blocks for an offense that ranks second in the nation in scoring.

— Richard LeCounte, Georgia. He leads the team in turnovers created the last two seasons. In 2019, the Bulldogs had 15 turnovers and he was part of seven of them. He leads them with three picks this season and is one of the best free safeties in college football.

— Kellen Mond, Texas A&M. A rare, four-year starting quarterback in the SEC, Mond has become the program’s all-time passing leader while guiding the seventh-ranked Aggies to a 3-1 start. He has a career-best 144.9 passer rating in his third season with coach Jimbo Fisher. He’s also doing it without top receiver Jhamon Ausbon, who opted out to prepare for the draft.

— Dylan Moses, Alabama. Even though the speedy linebacker missed last season with a knee injury, he still probably would have been a first-round pick had he turned pro. He came back and is now the Tide’s unquestioned defensive leader. He has a team-best 37 tackles, including 4 ½ for loss.

“I thought he played extremely well in this last game,” coach Nick Saban said. “He showed great leadership, really helped the other players play well. I think it was by far his best game in terms of execution, doing what he was supposed to do.”

— Monty Rice, Georgia. Hoping to boost his draft stock, the linebacker came back and is on pace to make himself more money. He leads the Bulldogs with 24 tackles, including two for losses. He forced and recovered a fumble and then returned it 20 yards for a touchdown in a victory over then-No. 14 Tennessee earlier this month.

— Jacoby Stevens, LSU. The safety was the lone wolf who stuck around for the defending national champions. He's also been a bright spot on one of the league's worst defenses. He has 22 tackles, two sacks, including a forced fumble, and two fumble recoveries.

— Kadarius Toney, Florida. The speedy and shifty receiver looks like a polished route-runner for the first time in four years. He has 18 catches for 237 yards and four touchdowns in three games — already closing in on career highs despite being a second option behind star tight end Kyle Pitts.

“It’s one thing to be this utility athlete, a get-it-to guy, but when you can become disciplined and a great technician at your position, that takes you to a whole other level," Florida coach Dan Mullen said.

— Marco Wilson, Florida. A three-year starter opposite first-round pick CJ Henderson, Wilson got a chance to garner more of the spotlight and raise his draft stock by returning. It backfired. He’s been arguably the biggest disappointment on the team’s dismal defense. He was beaten for a game-tying, 51-yard touchdown pass in a loss at Texas A&M.

— Landon Young, Kentucky: The lynchpin for the league’s top rushing attack is coming off a performance at Tennessee that earned him weekly honors as the SEC’s top lineman.