Smooth road for Kansas, K-State; Texas, Sooners last in B12 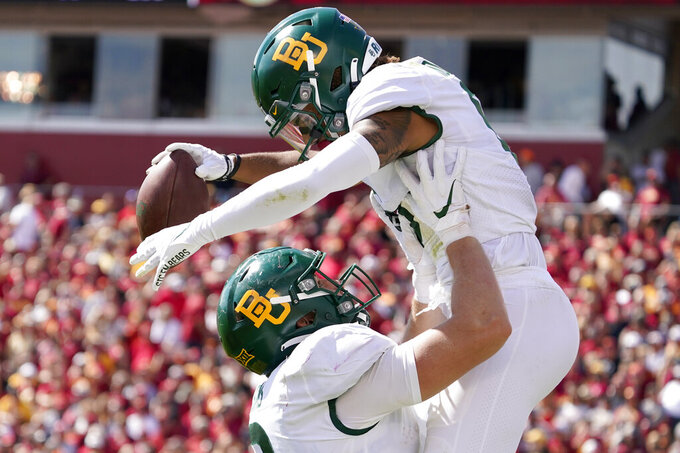 An eye-opening win by Kansas State over Oklahoma and strong starts by Kansas and other Big 12 teams on the road have thrown the early conference standings into an unfamiliar heap.

Perennial basement dweller Kansas is 4-0 and on the cusp of its first ranking in 13 years. And look who’s sharing the league cellar, for now — the Sooners and fellow Southeastern Conference defector Texas.

Heading into the first full week of the Big 12 schedule, there is no team with a losing record and there are only three unbeaten teams left. Big 12 road teams are 9-4 so far this season, winning four out of six games last week, the most in one week since Oct. 31, 2020.

Kansas State looked befuddled in a nonconference home loss to Tulane two weeks ago, only to go into Norman to take down No. 18 Oklahoma for the third time in four years under coach Chris Klieman. The Wildcats were rewarded with the No. 25 ranking.

“We just talked about belief,” Klieman said after K-State beat the Sooners 41-34 behind quarterback Adrian Martinez’s 148 rushing yards and five total touchdowns. “We talked about how we’re a really good football team that didn’t get it done last week and that was over. We needed to believe this week that we were good enough to beat these guys.”

The Wildcats have no time to gloat because it must prepare to host a Texas Tech team that took down visiting Texas in overtime with the help of a 6-of-8 performance on fourth down.

Kansas has won both of its road games, including at West Virgini a on Sept. 10. To put things in perspective, from 2008 to 2021, the Jayhawks won just five times total on the road, and not more than once in any season.

Now it's time for a visit from Iowa State, which won its only other road game, a 10-7 squeaker over Iowa on Sept. 10. It's going to be a run game, power vs. power: The Jayhawks have compiled at least 200 rushing yards in every game. Iowa State allows just 76 yards on the ground per contest.

The way this season is going, everything can change in one weekend. Four Big 12 teams are ranked and three others are receiving votes in the AP poll.

“I think the parity in this league is may be more than ever,” Oklahoma State coach Mike Gundy said. “And I’ve said this for a number of years. You might have a team win this league that has two or three losses. You might this year, from what I’m seeing. There’s quality in this league and the competitive nature of playing road games, which are difficult. You’re just seeing a lot of teams that are about the same.”

TCU is 3-0 for the first time since 2017 after new coach Sonny Dykes beat his former team, SMU, on the road. And now the Horned Frogs will prepare for their league opener and get a visit from Oklahoma in a matchup of teams averaging more than 500 yards of offense.

“You look at the ratings and all that stuff, I mean, the league is really good,” Dykes said. “I think that’s what makes our league different is there’s no layups. You say, OK, who’s the layup in the league? And there’s not anybody. And there’s just not many leagues that can say that.

“You know, the team that was picked last in the league is right on the verge of being in the Top 25. Where else does that take place, except in the Big 12?"

Oklahoma will find out if it can bounce back from the Kansas State loss. The Sooners won their only other road game decisively over Nebraska. Oklahoma lost its first two league games in the COVID-shortened 2020 season, then rebounded to win the league.

“We’re not going to be defined by this loss moving forward,” said Oklahoma coach Brent Venables. “We will, however, be defined by how we respond moving forward. I still believe with everybody I got in this team and what’s still sitting in front of us.”

No. 9 Oklahoma State won its first three games, all played at Boone Pickens Stadium. After a bye week, the Cowboys have their league opener Saturday at No. 16 Baylor in a rematch of last year's conference title game that the Bears won in the final minute.

West Virginia, which started the season 0-2, is looking for its second straight road win at Texas after beating rival Virginia Tech in Blacksburg on Thursday night. The Mountaineers are 3-2 in Austin, Texas, since joining the Big 12 in 2012.

“There’s a lot of football left in Big 12 play. We know that," Texas coach Steve Sarkisian said. "We’ve got to take care of our business, and that starts Saturday at home against a really good team who’s getting better week by week.”