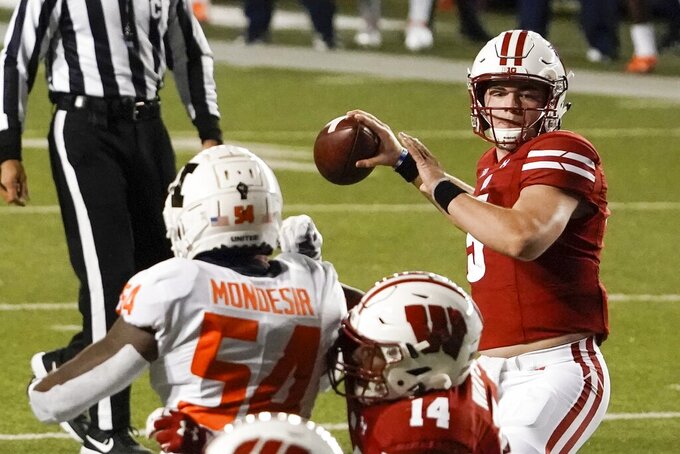 The passing accuracy displayed by Wisconsin's Graham Mertz and Ohio State's Justin Fields in their teams' openers had only been seen once before in the Big Ten in the past 20 years.

Mertz and Fields each completed 20 of 21 passes (95.2%) for the best performances in the country since another Big Ten quarterback, Minnesota's Tanner Morgan, hit 21 of 22 (95.5%) against Purdue last year.

Mertz, a redshirt freshman making his first start in place of the injured Jack Coan, threw for 248 yards and five touchdowns in a 45-7 win over Illinois. Fields, a senior who was third in Heisman Trophy voting last year, passed for 276 yards and two TDs in a 52-17 win over Nebraska.

Mertz completed his first 17 passes, matching the Badgers’ single-game record for consecutive completions. He was the third FBS player over the last 25 seasons to throw for five TDs and complete at least 95% of his passes in the same game, joining Cincinnati’s Gunner Kiel (vs. Central Florida in 2015) and Southern California's Matt Barkley (vs. Colorado in 2012).

Fields' completion percentage was a record for a Nebraska opponent with a minimum of 15 attempts. Fields was 15 for 21 (71.4%) against the Cornhuskers last year.

Wake Forest freshman safety Nick Andersen intercepted the first three passes of his career in a 23-16 win over Virginia Tech, joining Arkansas' Hudson Clark as the only players in the country to accomplish the feat this season.

Andersen was the first Wake Forest player with three picks since A.J. Greene in 1987 against Georgia Tech.

Wake Forest is tied for second nationally in interceptions with nine.

Liberty's Malik Willis joined Memphis' Brady White and Florida's Kyle Trask as quarterbacks to throw for six touchdowns in a game this season.

Willis also ran for a score, giving him a Flames' program-record seven touchdowns in a 56-35 win over Southern Mississippi. The junior passed for a career-high 345 yards.

Texas Tech's Austin McNamara set a school record with an 87-yard punt against West Virginia that was the second-longest in the nation since at least 2012, and longest since Marshall's Kaare Vedvik got off a 92-yarder in 2017.

McNamara also had a 74-yarder against the Mountaineers, tied for fifth-longest in the FBS this season. He leads the Big 12 with an average of 46.5 yards.

Michigan State, which lost 38-27 at home to Rutgers in Mel Tucker's first game as head coach, joined Duke and Mississippi as teams that have committed seven turnovers in a game this season. They are the only teams to do so since 2018.

Rutgers hadn't had an opponent cough up the ball so many times since Pittsburgh in 2000.