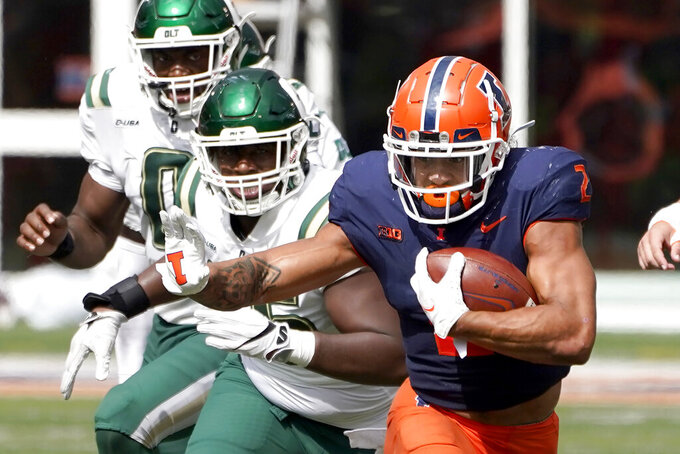 SMU's Tanner Mordecai is throwing touchdown passes at the fastest rate in the Football Bowl Subdivision since 2012.

The Oklahoma transfer has passed for at least four in each of the Mustangs' games, and his total of 24 is the most through five games since West Virginia's Geno Smith had the same number at this point nine years ago.

Mordecai is the fourth FBS quarterback since 2000 to have 24 TD passes at this point in a season.

The junior opened the season with seven TD passes against lower-tier Abilene Christian, then had four against North Texas, five against Louisiana Tech and four each against TCU and South Florida.

Mordecai was a four-star recruit coming out of high school in Waco, Texas. He appeared in a total of 12 games for Oklahoma, backing up Jalen Hurts in 2019 and Spencer Rattler last year. He transferred to 24th-ranked SMU after 2020 starter Shane Buechele declared for the NFL draft, and he won the starter's job in August.

Iowa intercepted six passes against Maryland on Friday, the Hawkeyes' most since they had seven against Wisconsin in 1982.

Six players had an interception, tying the school record for most players with a pick in a game.

Iowa leads the nation with 12 interceptions, and its 76 since 2017 are most in the country.

Six players rushed for at least 200 yards, led by Chase Brown's 257 yards on 26 carries for Illinois against Charlotte.

There have been 15 200-yard performances, all by different players.

East Carolina has won three straight games for the first time in seven years, a notable accomplishment for a team whose 32 wins since 2014 are fewest among current members of the American Athletic Conference and tied for 106th nationally.

Wake Forest's Nick Sciba connected on all three of his field goals against Louisville, extending the longest active streak of makes to 22. His .905 career field goal percentage (67 of 74) is the best in NCAA history.

Nebraska’s William Przystup got off the longest punt of the season in the FBS with his 84 yarder against Northwestern. It was a nice bounce-back. His previous punt, against Michigan State on Sept. 25, was a 7-yard shank.