STAT WATCH: Wake turnovers in 3rd most in quarter since 2010 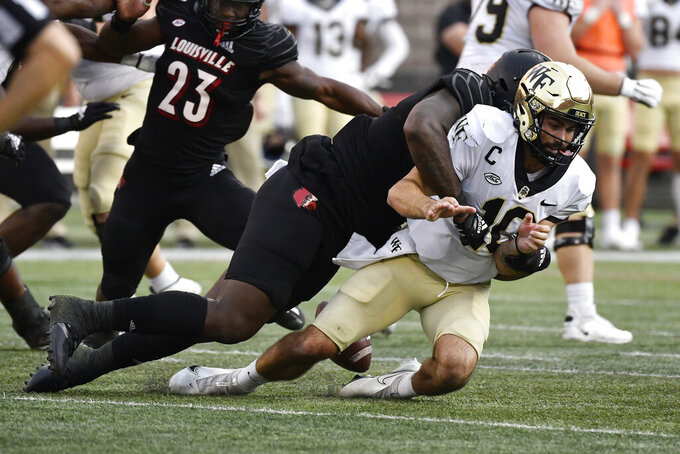 It's been more than a decade since a Football Bowl Subdivision team turned over the ball as many times in a 15-minute span as Wake Forest did against Louisville.

The Demon Deacons' six turnovers in the third quarter of its 48-21 loss Saturday were the most in a quarter since Oklahoma State committed six in the fourth in a 21-7 Cotton Bowl loss to Mississippi on Jan. 3, 2010.

Sam Hartman was responsible for all six of Wake Forest's third-quarter turnovers, fumbling three times and throwing three interceptions. Two of those interceptions were returned for touchdowns.

Before Saturday, no player had turned over the ball more than four times in a quarter since at least 2015, according to Sportradar. Hartman was the second player this season to commit six turnovers in a game. Utah State's Logan Bonner did it against UNLV on Sept. 24.

The Deacons finished the game with eight turnovers, tying the national season high Miami set the week before against Duke.

Mississippi first-year running back Quinshon Judkins became the 16th player to rush for at least 200 yards in a game this season, carrying 34 times for 205 against Texas A&M.

Judkins' season total of 1,036 yards is the school freshman record, and he's among seven FBS players to go over 1,000 this year. His 34 carries were most by an Ole Miss player since Deuce McAllister ran 36 times against Mississippi State in 1999.

Illinois' Tommy DeVito had the best completion rate of the season in a game matching FBS opponents, completing 20 of 22 against Nebraska. His 90.9% accuracy also was tops among quarterbacks who have ever visited Lincoln and had a minimum of 20 attempts.

San Jose State's Cade Hall became the fourth FBS player this season to record four solo sacks in a game, doing it against Nevada. He has 6.5 sacks for the season to lead a defense that's first in the Mountain West with an average of 3.0 per game.

Hall's teammate, Viliami Fehoko, had 5.5 tackles for loss against Nevada, second most in a game this season.

South Alabama's defense turned in the season's best performance against the run when Arkansas State netted minus-19 yards on 19 attempts. The Jaguars had previously never allowed fewer than 9 yards rushing against a Division I opponent.

The Jaguars had entered the game 11th in the nation in rushing defense, at 99.9 yards per game, and are now fourth, at 85.

Illinois's defense is first in fewest points (8.9) and yards (224.5) allowed per game. James Madison leads the nation in rushing defense (55.6 yards per game) and Boise State in pass defense at (133.6 per game).