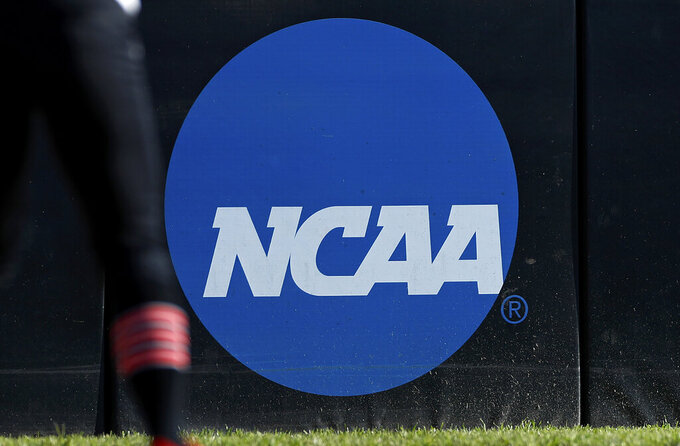 FILE - An athlete stands near the NCAA logo during a softball game in Beaumont, Texas, April 19, 2019. The latest diversity study on FBS hiring finds women and people of color are underrepresented in athletic departments. The report card was issued Wednesday, Jan. 26, 2022, by The Institute for Diversity and Ethics in Sport.(AP Photo/Aaron M. Sprecher, File)

A diversity study showed Football Bowl Subdivision schools continue to underrepresent women and people of color in hiring for leadership positions at athletic departments of the sport's highest level of competition.

The report card, issued Thursday from The Institute for Diversity and Ethics in Sport (TIDES) indicated improvement from a year ago with an overall grade of D-plus, up from a D in 2021. Racial hiring also increased its grade to a B-minus from a C last hear.

However, gender hiring remained an F with the study finding women make up only 10 percent of athletic directors at the 130 schools in the FBS.

“You see over a 25-year period of time we’ve been forever without much movement, at these positions in particular,” Richard Lapchick, the head of the institute and lead author of the report, told The Associated Press.

There were improvements in other areas, the report found, with non-white athletic directors rising to 18.5%, “thus slightly reducing the dominance of white people in these positions,” Lapchick said.

Lapchick said change toward a more diverse staff starts at the top, another area of concern. The report found there were only 22 people of color holding positions of school president or chancellor, one fewer than a year earlier.

Overall, white people held 324 of the 395 campus leadership positions reported in this study, which was the same from last year,

The TIDES report card also tracked the racial makeup of FBS head coaches and athletes. It found less than one in five head coaches weren't white while Black, Hispanic or Latino athletes comprised more than 51% of all FBS football players.

“There is much room to grow in the head coaches' position to be as racially diverse as the population of DI FBS student-athletes,” according to the report.

The NCAA tried to address diversity hiring by adopting a pledge in September 2016 to be more inclusive in its leadership searches, akin to the NFL's “Rooney Rule” about a diverse candidate pool. The report noted that 878 schools and 102 conferences at all NCAA levels signed the pledge.

But Lapchick said there are no sanctions or price to pay for institutions that don't follow the guidelines.

Still, after 25 years of tracking diversity hiring for several pro and college organizations, Lapchick remains hopeful that positive change is ahead.

Lapchick believes the athlete activism seen the past few years in the aftermath of several high-profile incidents like the killing of George Floyd in Minneapolis in 2020 will continue and can lead to change.

Athletes and their coaches who marched for change continue to demand accountability, Lapchick thinks, and foresees their influence growing when college administrators are tasked with picking coaches and athletic directors.

He also sees decision makers listening more to athletes than in the past. Plus, Lapchick is confident improvements in diversity hiring among pro leagues like the NBA and NFL will flow down to the NCAA.

“The frustrations that I've felt over the years have been eased by my beliefs that people in the decision making roles in the league offices all have this as a priority," Lapchick said, “and will do something about it."