Surprising Duke looks to turn the tables on Pittsburgh 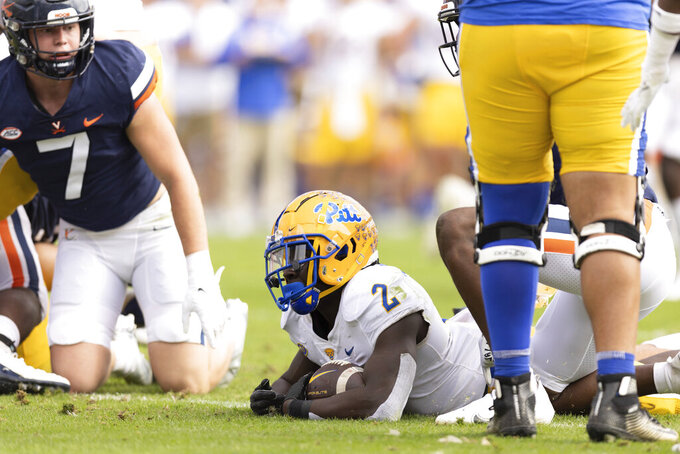 Pittsburgh's Israel Abanikanda (2) scores a touchdown against Virginia during the first half of an NCAA college football game in Charlottesville, Va., Saturday, Nov.. 12, 2022. (AP Photo/Mike Kropf)

Duke's offensive line vs. Pitt's front seven. The Panthers have struggled at times against mobile quarterbacks, losing to Tennessee (Hendon Hooker), Louisville (Malik Cunningham) and Georgia Tech (Jeff Sims) because they had trouble keeping the signal callers in the pocket. Duke's Riley Leonard leads the team in rushing (625 yards). If the Panthers want to extend their mastery over the Blue Devils, they're going to need to keep Riley in check.

Duke: RB Jaylen Coleman. He missed more than a month due to injury before returning with 50 yards rushing on 13 carries in the Virginia Tech win. He had opened the season with four straight games with a rushing touchdown.

Pittsburgh: DL Calijah Kancey. The redshirt junior is the only player in the country who is a finalist for both the Nagurski and Outland trophies. Kancey is coming off a 3 1/2-sack performance against Virginia. He's the heart of a defense that has rebounded nicely following a loss to North Carolina last month that effectively ended Pitt's chances of repeating as ACC champions.

Duke's four ACC wins mark the program's best regular-season total since going 5-3 in 2014, the year after the Blue Devils won the Coastal Division title. ... Duke had lost 21 of 23 league games dating to the 2019 season before this year. ... The Blue Devils haven't beaten the Panthers since a 51-48 double-overtime home win in 2014. Pitt has won 10 of 11 meetings since Duke's 14-7 win on the road in 1966. ... Pitt head coach Pat Narduzzi is one win shy of tying Pop Warner for second on the school's all-time victory list. Narduzzi is 59-41 in eight seasons with the Panthers. Warner went 60-12-4 from 1915-23. ... The Panthers have 37 sacks on the season tops in the nation. Pitt leads the FBS in sacks since the start of 2019. ... Pitt RB Israel Abanikanda leads the ACC in rushing (1,207 yards) and is ninth in the FBS despite missing one game with an undisclosed injury. ... Panther QB Kedon Slovis is hoping to build momentum down the stretch. The USC transfer threw his first touchdown pass since early October last week against Virginia.