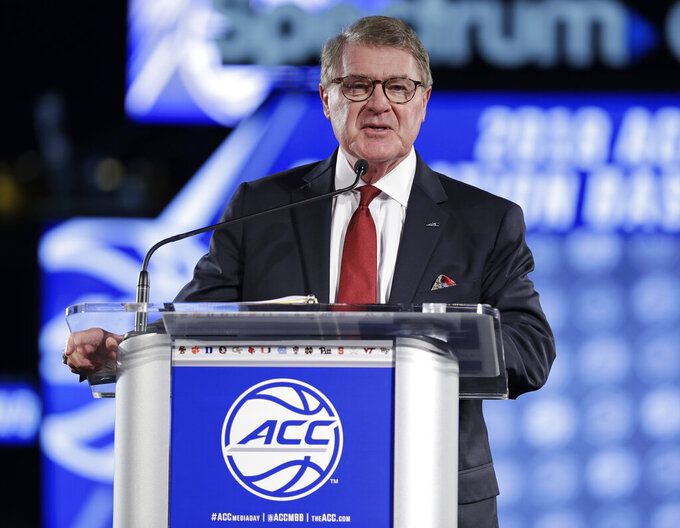 FILE - In this Oct. 24, 2018, file photo, Commissioner John Swofford speaks to the media during a news conference at the Atlantic Coast Conference NCAA college basketball media day in Charlotte, N.C. Speaking Monday, May 6, 2019, at a regional Associated Press Sports Editors meeting in Greensboro, N.C., Swofford said "everything is on schedule" for the August launch of the league's TV channel. (AP Photo/Chuck Burton, File)

GREENSBORO, N.C. (AP) — Atlantic Coast Conference commissioner John Swofford says "everything is on schedule" for the August launch of the league's TV channel.

Speaking Monday at a regional Associated Press Sports Editors meeting, Swofford says a focus now is getting more distribution deals for TV providers to carry the ACC Network. He said the channel has "hit every mark" so far in securing those deals because the league is partnered with Disney-owned ESPN, with Swofford saying: "Mickey Mouse carries a lot of weight."

The league hopes the channel's launch helps it close a financial gap with its power-conference peers, which has only grown in recent years.

The average payout for the ACC's 14 full-time members for the 2016-17 season was $26.6 million with football driving the revenues, according to federal tax filings.

By comparison, the Southeastern Conference — which launched its own ESPN-partnered channel in 2014 — distributed nearly $41 million per school that year and while the Big Ten, Big 12 and Pac-12 all averaged more than $31 million.

Swofford has declined to talk about specific financial projections for the ACC Network, and has said it could take years to provide full benefits.

"You want to be as strong out of the chute at launch as possible," Swofford said Monday. "And based on our internal projections and what we expect the first year, I'm very confident that will be the case. Will it be at its max, is the other question. It may or may not be at its max, I suspect it will evolve a bit over a year or two."

The channel has already secured distribution deals with several TV providers, both in terms of linear providers (such as cable service) and standalone services used by cord-cutters such as Hulu Live TV and PlayStation Vue.

"From a distribution standpoint, it's to a point today where if it's linear distribution, great," Swofford said. "If it's direct to consumer, that's great too. Their mantra is: 'we don't care what you're watching it on, just be watching it' because the revenues will come in either respect."

The bulk of the channel's production will take place in Bristol, Connecticut to utilize ESPN's existing campus, with some production and business aspects taking place in Charlotte — located about an hour's drive south from the league's Greensboro headquarters.

Swofford said the league is also working on hiring on-air talent and creating programming beyond the roughly 450 live events that are estimated to air annually.

Each school was also required to create broadcast space ahead of the launch. Swofford said most are ready now, while he's "totally confident" that the others will be ready in time.

"We don't think we could be in any better shape than we are right now," Swofford said.