Syracuse's 1-2 punch of Tucker and Shrader tough to stop 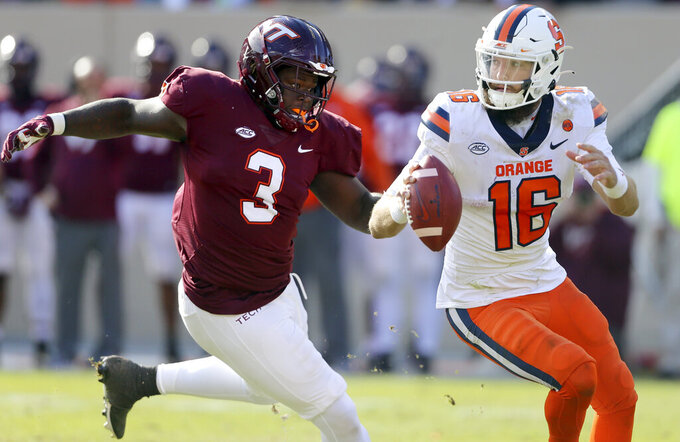 A year after the Orange suffered through an injury-riddled season that saddled them with 10 losses, new quarterback Garrett Shrader — he's No. 16 — and record-setting tailback Sean Tucker have given the team a big jolt offensively and likely helped coach Dino Babers rest a little easier.

Syracuse (4-4, 1-3 Atlantic Coast Conference) is two wins from becoming eligible for the postseason, a significant turnaround from 1-10 in 2020.

Since Shrader replaced Tommy DeVito as the starter in Game 4 at home a month ago and led the Orange to a last-second victory over Liberty, the 6-foot-4, 230-pound transfer from Mississippi State of the Southeastern Conference has given the Orange something that's been missing since Eric Dungey's career ended in 2018, something that was a big part of some of the program's most successful seasons since the 1980s — a major running threat at quarterback. Think Don McPherson or Donovan McNabb.

In Saturday's comeback win on the road over Virginia Tech, Schrader put up 411 yards offensively and was responsible for five touchdowns, running for three scores and 174 yards before throwing for two more in the final 2:28 to overcome a nine-point deficit. Tucker tacked on 112 yards and scored once in the 41-36 victory.

Their season totals are impressive.

— The 5-10, 210-pound Tucker has gained 1,060 yards rushing, the only player in FBS this year to reach 1,000, his 1,298 all-purpose yards also lead the nation, and his six straight 100-yard games are a program record. He's also averaging 6.1 yards per carry and his seven 100-yard games this season match a school record set in 1956 by Jim Brown, the man who started the tradition of greatness associated with Syracuse's now retired No. 44, and equaled by Joe Morris (1979) and James Mungro (2001). It seems just a matter of time before Morris' school season rushing record of 1,372 yards falls.

— Shrader has gained 548 yards rushing, passed for 814 more, and has been responsible for 16 TDs in five games as the starter.

The duo has boosted Syracuse to eighth nationally in rushing yardage with an average of 242. That's just 21.3 behind Ole Miss, which is tops among teams that don't run the triple option (Air Force and Army are 1-2). Tucker also ranks second on the Orange in receiving with 16 catches for 238 yards and two touchdowns.

“They are really running the football, that’s what they’re doing," said Clemson coach Dabo Swinney, whose Tigers held on for a 17-14 victory over Syracuse two weeks ago, despite 157 yards rushing by Tucker. "They are really sold out with this quarterback on every run scheme you can think of when it comes to the quarterback run game and all the complementary stuff that comes with it. (Tucker) is special. He’s explosive, he’s fast, he’s got great vision and power in the hole, great change in direction. He’s a really good player.”

The soft-spoken Tucker, who also ran track in high school, was rated a three-star selection by 247Sports out of Calvert Hall College High School in Towson, Maryland. Syracuse recruiters certainly found a diamond in the rough.

“We thought he was a good player, but you never know. He didn’t have all the stars,” Babers said. “It’s one of those deals where it’s really hard to tell. You think they’re going to be good, but then you’ve got to get them to college and you’ve got to see. Sometimes as they’re growing up they go down the wrong path, and sometimes while they’re growing up they may not have been on a certain path and they get on this path and it elevates them to another level that you would have never thought they could get to. But we really thought he was good, and we’re happy that he’s still developing."

Added Tucker: “I’ve always felt confident in myself, so I could see that success coming.”

Shrader, a native of Charlotte, North Carolina, tossed the winning touchdown against Virginia Tech to second-year wideout Damien Alford, a 45-yarder with 19 seconds left in the fourth quarter. That brought his season passing totals to 83 of 158 for 1,054 yards and seven TDs with three interceptions. The team has averaged 29.2 points with Shrader under center; last year's team averaged 17.8, though DeVito, a two-year starter who just left the program, didn't play the final seven games because of an ankle injury.

“I look at Shrader and the things that he’s done, I just think he really wants to win really, really bad," Babers said. "When you’ve been somewhere and somebody says you can’t, you go somewhere else and now people say you can. You don’t want to let them down.”