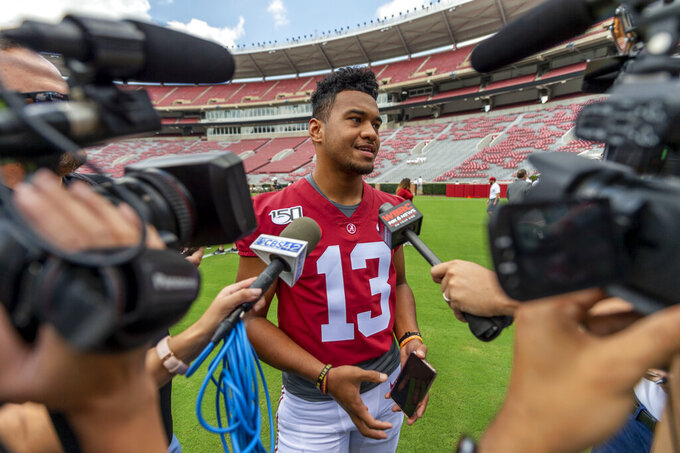 TUSCALOOSA, Ala. (AP) — Alabama is hardly immune to change, with an assemblage of new assistant coaches and the next wave of blue-chip prospects replacing the old ones.

The challenge for quarterback Tua Tagovailoa and the Crimson Tide will be sustaining and finishing, they hope, on top. Alabama certainly has the offensive firepower to contend for a sixth national title under Saban. The defense is still well stocked with standouts like middle linebacker Dylan Moses, defensive end Raekwon Davis and cornerbacks Trevon Diggs and Patrick Surtain Jr.

But the customarily stingy group was downright porous at times over the final few games — albeit against star quarterbacks Jake Fromm, Kyler Murray and Trevor Lawrence.

Players on both sides of the ball can't forget that 44-16 humbling at the hands of Clemson in the title game. That's a lesson teams don't get by steamrolling every regular season opponent.

"Losing, it was a very humbling experience," said Moses, a Butkus Award finalist in 2018. "It took a lot from us but it really opened our eyes to what really needs to be done."

"We don't change systems at Alabama," Saban said. "We change the system to effectively take advantage of the players that we have in our program."

Three first-round NFL draft picks are among those players no longer around.

But Tagovailoa is back with his choice of receivers to target after racking up Alabama season marks for passing yards and touchdowns. That group includes Biletnikoff Award winner Jerry Jeudy , Henry Ruggs III, DeVonta Smith and Jaylen Waddle. Najee Harris takes over at tailback after averaging 6.5 yards per carry in two seasons as backup.

It's a roster that stamps Alabama as the SEC favorite and perhaps the top candidate to return the favor and dethrone national champ Clemson.

Last season's ending, Saban said, made Alabama eager to "sort of re-establish the standard that we'd like to play to."

That standard also remains the same.

Here are some things to know about this Alabama team:

Alabama appeared set at running back with Harris, Brian Robinson Jr. and coveted freshman recruit Trey Sanders . But Sanders, rated the nation's No. 6 overall prospect by 247Sports, sustained a foot injury that required surgery. Saban said on Aug. 10 that Sanders was "out indefinitely." Former four-star prospects Jerome Ford and Keilan Robinson could provide depth in the meantime.

Alabama has three key defenders returning from injuries that cost them most or all of last season. Linebacker Terrell Lewis missed 10 games with an arm injury in 2017 and sat out last season with a knee injury sustained over the summer. Diggs is also back after missing the final nine games with a foot injury. A preseason torn ACL also sidelined linebacker Allen for the entire season. Lewis and Allen could provide a boost to Alabama's pass rush.

The nation's top-rated recruiting class includes a number of potential early contributors . DJ Dale was far from the most heralded but ended spring looking like a potential starter or key backup at nose tackle. Top 10 prospects Antonio Alfano (defensive end) and Evan Neal (offensive line) are among other freshmen trying to get on the field early, like Sanders was expected to before his injury.

Alabama faces Duke Aug. 31 in its nearly annual neutral-site opener against a Power 5 team, this one in Orlando.

KEY GAMES: Oct. 12 at Texas A&M; Nov. 9 LSU and Nov. 30 at Auburn. The toughest nonconference game is against Duke with New Mexico State, Southern Miss and Western Carolina also visiting in a schedule that certainly shapes up as less challenging than usual. Only Duke won more than six games from that group last season.