Talent in, talent out: Young, No. 1 Alabama still favorites 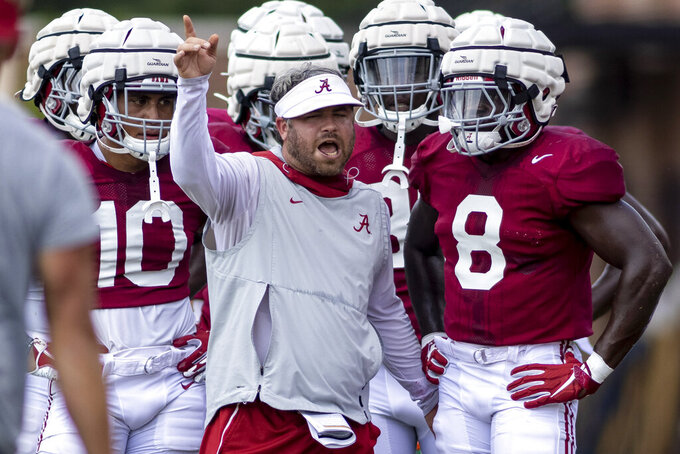 The bad news for Alabama: The Heisman Trophy-winning receiver and his quarterback are gone, along with the star tailback and Southeastern Conference defensive player of the year.

The good news: It’s Alabama and there is always an abundance of talent to replace players.

The defending national champion Crimson Tide lost the usual boatload of talent to the NFL after the second perfect season of coach Nick Saban’s career. They’re still ranked preseason No. 1 for the fourth time in six years, led by new quarterback Bryce Young and a defense that appears capable of picking up any slack for an offense breaking in new playmakers.

Nobody replaces talent better than Saban, but he's quick to point out that the replacements will typically be younger and less experienced.

“That’s why rebuilding is a tremendous challenge,” he said. “That’s why it’s very difficult to repeat.”

Not to mention a daunting Southeastern Conference schedule.

Even with six national titles during the Saban era, Alabama has only successfully defended once, in 2012.

Alabama must replace six first-round NFL draft picks, including receiver DeVonta Smith, quarterback Mac Jones and tailback Najee Harris from one of the nation's most explosive offenses. But Young is a heralded former 5-star recruit who has, according to wide receiver John Metchie III, “endless potential.”

Brian Robinson Jr. finally gets his chance to play a bigger role after backing up Harris, a Heisman finalist like Jones and the winner Smith. A couple of former five-star prospects are among those also vying for carries.

The defense didn't lose nearly as much talent and even added former Tennessee standout Henry To'oTo'o to an already loaded group of linebackers led by Christian Harris and Will Anderson. Gone is cornerback Patrick Surtain Jr., one of the first-rounders and the SEC's top defender.

The highest rating recruiting class ever in the 247Sports composite rankings has plenty of potential contributors.

Bryce Young is Saban's highest-rated quarterback recruit at Alabama, rated as the second-best prospect nationally in 2020 according to the 247Sports composite rankings. He's even raking in close to seven figures in name, image, likeness money, according to Saban, before starting a single game.

Young didn't log a huge number of snaps as a freshman behind Jones, but he's drawn praise from Saban and teammates so far.

“I'm really excited for him to get his shot,” Metchie said.

The last two years, four Alabama receivers have been first-round draft picks. Even if the Tide doesn't keep that string going, they should be in good hands. Metchie had 55 catches for 916 yards last season. The group is bolstered by the transfer of speedster Jameson Williams from Ohio State, along with talented freshmen like Agiye Hall and Ja'Corey Brooks.

Alabama was already loaded at linebacker even before To'oTo'o arrived to help replace Dylan Moses.

Anderson started every game as a freshman and ranked third in the SEC with seven sacks and 10.5 tackles for loss. Harris was a semifinalist for the Butkus Award. Christopher Allen led the SEC with 13 tackles behind the line. To'o To'o brings another veteran presence to the defense after starting for two seasons with the Volunteers.

“We thought Henry was one of the best players, defensive players in our conference, in watching him play at Tennessee, and we had recruited him in high school,” Saban said. “We thought he was an outstanding player in high school. We’re talking about a fine young man who’s very intelligent, very instinctive player, very conscientious."

Like usual, Alabama opens the season with a Power 5 conference opponent at a neutral site. The Tide face preseason No. 14 Miami in Atlanta on Sept. 4. Tough road games at No. 13 Florida and No. 6 Texas A&M also await.