Talented group of QBs hope to give SEC hierarchy a jolt 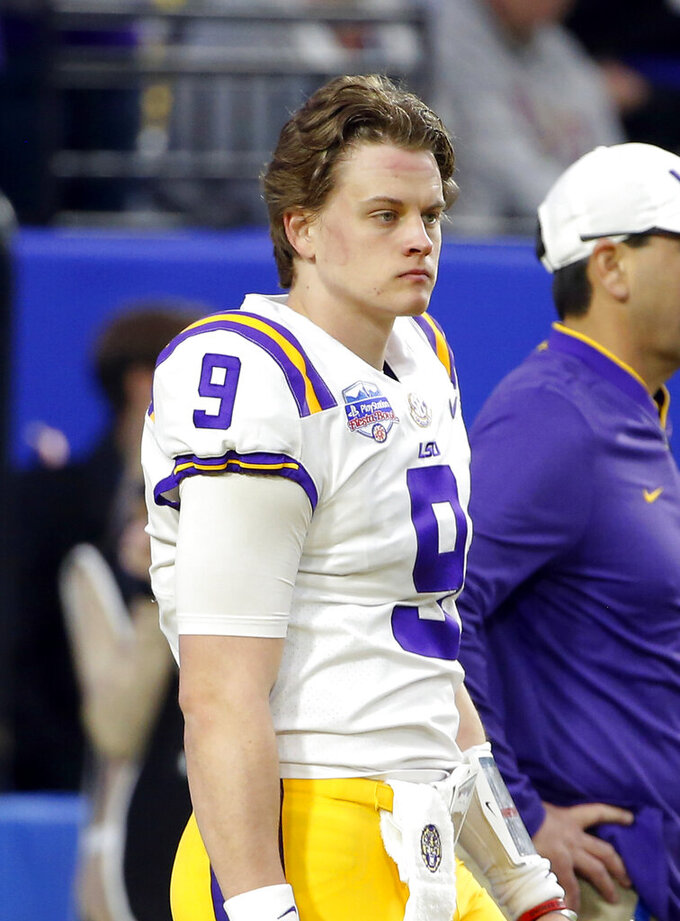 FILE - In this Jan. 1, 2019, file photo, LSU quarterback Joe Burrow attends warmups before the Fiesta Bowl NCAA college football game against UCF in Glendale, Ariz. This year, a group of talented and experienced quarterbacks could help the Southeastern Conference produce a little more drama. Georgia’s Jake Fromm, LSU’s Burrow, Florida’s Feleipe Franks and Texas A&M’s Kellen Mond are among the biggest reasons all those teams feel they have a realistic chance of knocking Alabama off its title perch. (AP Photo/Rick Scuteri, File) 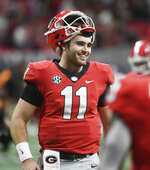 Alabama's dominance ranks among the most impressive dynasties in college football history.

It has also made the Southeastern Conference a bit stale recently as the league's 14 teams gather for their annual media days this week in Hoover, Alabama.

This year, though, a group of talented and experienced quarterbacks could lead to a little more drama in the SEC — maybe. Georgia's Jake Fromm, LSU's Joe Burrow, Florida's Feleipe Franks and Texas A&M's Kellen Mond are major reasons those teams feel they have a realistic chance of knocking Alabama off its title perch.

Still, the Tide will once again be regarded as a heavy favorite to win their fifth league title in six seasons. Coach Nick Saban — now in his 13th season in Tuscaloosa — returns several of his best players, including last year's Heisman Trophy runner-up Tua Tagovailoa, who threw for 3,966 yards, 43 touchdowns and six interceptions.

Alabama blew through last year's regular-season conference schedule by winning all eight games by at least three touchdowns. That success was largely forgotten after Clemson thumped Alabama 44-16 in the national championship game , which will surely motivate the Tide going into 2019.

Georgia is the most obvious candidate to displace the Tide. Last year's Eastern Division champion — which lost 35-28 to Alabama in the SEC title game last season — returns the 6-foot-2 Fromm, who has thrown for more than 5,300 yards over the past two years.

Here are other things to watch when the league's programs gather in Hoover this week:

In a rare show of stability, the SEC didn't have any head coaching changes during the offseason for the first time since 2006. Saban is the league's longest-tenured coach at 13 seasons. The next two in seniority are Auburn's Gus Malzahn and Kentucky's Mark Stoops, who are in year seven.

Two of the SEC's high-profile coaching hires from a year ago worked out very well. Jimbo Fisher led Texas A&M to a 9-4 season while Dan Mullen jumped to Florida from Mississippi State and led the Gators to 10 wins. Now Fisher and Mullen will be expected to compete for their respective division titles in year two.

Alabama returns an extremely talented team, even by its lofty standards. Tagovailoa gets a lot of the publicity because he's the quarterback, but it's not a one-man show. Among the standouts: Running back Najee Harris, receivers Jerry Jeudy and Henry Ruggs, offensive linemen Jedrick Willis and Alex Leatherwood, defensive end Raekwon Davis and linebackers Dylan Moses and Anfernee Jennings.

Kentucky showed patience while allowing Stoops to slowly build the program and it paid off with a 10-win season in 2018. Now the Wildcats will have to rebuild without some of their best players from a year ago, including running back Benny Snell, who ran for 1,449 yards and 16 touchdowns.

After a two-year postseason ban because of NCAA rules violations, the Rebels are once again eligible to play in a bowl game. Third-year coach Matt Luke hired two veteran coordinators during the offseason — Rich Rodriguez on offense and Mike MacIntyre on defense — to help rebuild the roster. The two have more than 30 years combined of head coaching experience.