Temple set for 2nd Top 25 upset when it plays No. 23 Memphis 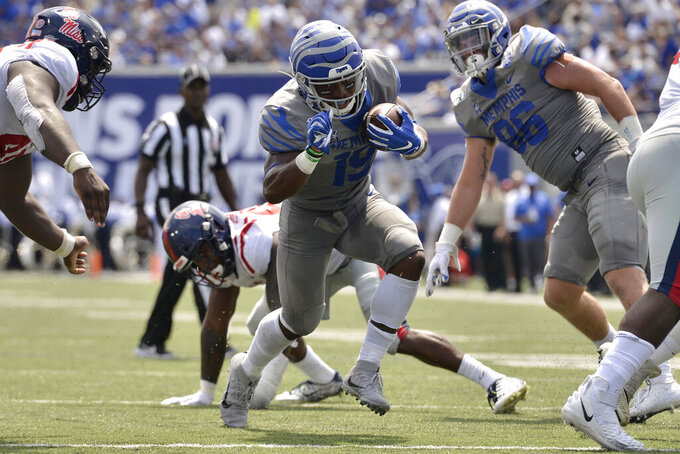 FILE - In this Aug. 31, 2019, file photo, Memphis running back Kenneth Gainwell (19) carries the ball in the first half of an NCAA college football game against Mississippi, in Memphis, Tenn. Gainwell has run for 620 yards and averages 124 yards rushing per game to rank sixth among all Football Bowl Subdivision players. Memphis takes on Temple in Philadelphia on Saturday. Temple ranks second among all FBS teams in red-zone defense and fourth in third-down conversion percentage defense. (AP Photo/Brandon Dill, File)

PHILADELPHIA (AP) — Temple wants to go 2-for-2 in knocking off Top 25 teams at home.

The Owls pulled off the first upset when they beat then-No. 21 Maryland to prove a program that has been a bowl game regular of late would be just fine under first-year coach Rod Carey.

Memphis is 5½-point favorites to get the win that moves them to 6-0. Kenneth Gainwell has emerged as one of the nation's most productive running backs since taking over for an injured Patrick Taylor Jr. early this season. Gainwell has run for 620 yards and averages 124 yards rushing per game to rank sixth among all Football Bowl Subdivision players.

"Their commitment to the run sets up every thing that they do," Carey said. "They certainly have dynamic playmakers. Everything is set up with that run game."

The Tigers are plenty potent on offense. Brady White has thrown three touchdown passes in each of Memphis' last three games and ranks seventh among all FBS players in passing efficiency (184.95) and 13th in completion percentage (.717).

"You turn on the film and you see really good football players, really well coached, dynamic and explosive," Carey said.

The AAC West is setting up for quite a finish with the Tigers, SMU, Tulane and Navy all off to good starts. Houston also is still in the mix.

"As we're jumping into conference play, I think anybody and everybody across the country sees the quality of the American Conference and the teams we have in it," Memphis coach Mike Norvell said. "This week we're going to play one of the best of them."

Some other things to know about Temple's matchup with Memphis:

Temple ranks second among all FBS teams in red-zone defense and fourth in third-down conversion percentage defense. Temple is allowing teams to convert just 24.4% of their third-down situations.

"This is one of the best defenses in the country," Norvell said. "They're extremely talented, they've got great length, experience. Their three linebackers, they can play anywhere in the country.

Memphis' Kenneth Gainwell has exceeded the 100-yard mark in three straight games, including a 209-yard performance last week in a 52-33 victory over Louisiana-Monroe.

The impressive freshman could face his toughest test in finding those 100 yards against a Temple defense that ranks second in the AAC in run defense, yielding 3.2 yards per carry and 125.6 yards rushing per game. Memphis also lost running backs Darrell Henderson and Tony Pollard to the NFL draft and had counted on Taylor, who rushed for over 1,100 yards last year, to carry the running back. But once he was injured in the season opener, Gainwell made the most of his chance in the spotlight. Gainwell is on pace to deliver the fourth 1,000-yard single-season rushing performance in the last three years for Memphis. That comes after Memphis didn't have a single 1,000-yard rusher from 2010-16.

This game begins a demanding stretch for Temple, which visits No. 21 SMU and hosts Central Florida the next two weeks. Temple has won its last seven games at the Linc.

Memphis is trying to become the fourth team in program history to start 6-0 and clinch its earliest bowl bid in history.