Texas A&M, Ole Miss seeking to bounce back from losses 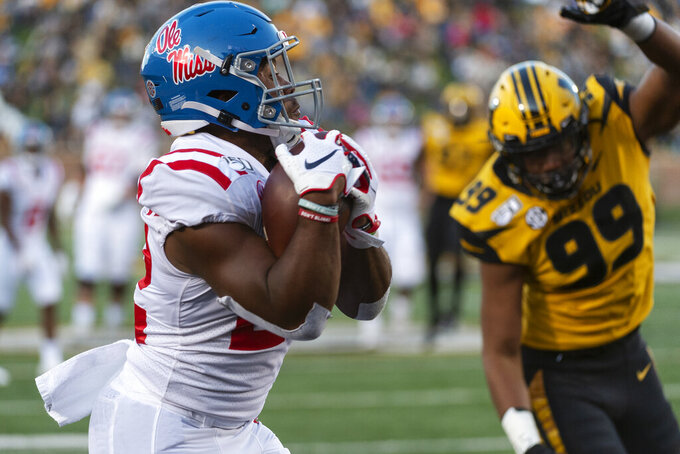 OXFORD, Miss. (AP) — Mississippi's game with Texas A&M on Saturday could have significant postseason implications for both programs.

All three of Texas A&M's losses have come against teams ranked 11th or higher: Alabama, No. 3 Clemson and No. 11 Auburn. The Aggies' only wins over Arkansas, Texas State and Football Championship Subdivision program Lamar.

"We've got to get more experience," Aggies coach Jimbo Fisher said. "As you get comfortable and your guys know their roles, and there's a lot of young guys in roles right now that are really growing that I think are getting better. And I think as you practice during the season, you get better. You should get better."

With LSU and Auburn looming on the schedule, Saturday provides an opportunity for Ole Miss to take a concrete step toward bowl eligibility. The same can be said for Texas A&M, which still has trips to Georgia and LSU on the schedule as well as home games against Mississippi State and South Carolina.

Some other things to know about the Texas A&M-Ole Miss matchup.

Corral's passing kept the offense from being one-dimensional.

"One can really throw it and run well, and the other one can really, really run," Fisher said. "I mean, he's fast. He's 4.4, 4.5 fast. And they're doing a good job of just putting together what they have to do. Young backs, they can throw it, keep you spread, and go no huddle. But they're dynamic players."

CAN MOND CARRY THE AGGIES?

The Aggies have relied heavily on quarterback Kellen Mond both through the air and to spark what has been a stagnant running game. A&M has been without starting running back Jashaun Corbin since the second game of the season.

Mond has completed 63 percent of his passes and is the team's second leading rusher.

The rushing attack under offensive coordinator Rich Rodriguez has largely been a youth movement behind senior Scottie Phillips. Freshmen Jerrion Ealy and Snoop Connor have rushed for a combined 559 yards and four touchdowns this season.

"But it is still counters, it's powers, it's stretches, it's zone reads," Fisher said. "It's still the same kind of runs. They're doing a lot more no-huddle and from a lot more spread looks in what they're doing, but they just do it and do it well. And that's their identity."

Phillips leads the team in carries with 110, but the emergence of Plumlee and the younger backs has lessened his workload a bit.

"We have a lot of talented backs," Phillips said. "It is good for us. It keeps us fresher."

The Aggies have just nine sacks through six games. Defensive tackle Justin Madubuike is the only player on the roster who has recorded multiple sacks.

"We got to keep leveraging the ball, practicing those things, working on the pass rush," Fisher said.

The opportunity will presumably be there. Plumlee and Corral have been sacked a combined 14 times this season, a large number considering the Rebels run the ball nearly 65 percent of the time.