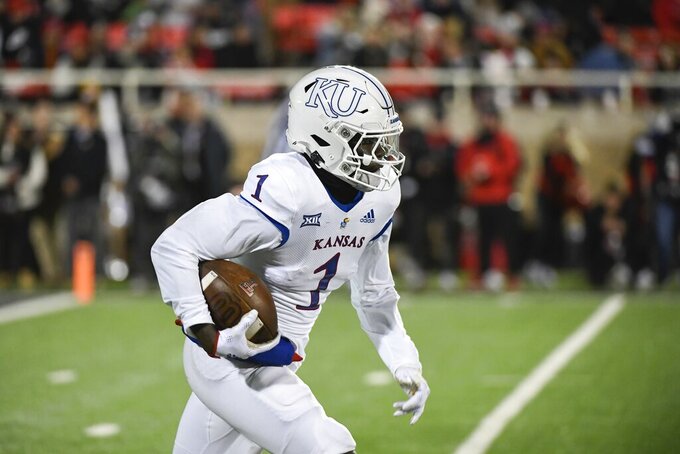 Texas needs to win its last two games and get some help from the rest of the Big 12 if it wants to sneak into the Big 12 title game. The Longhorns also are out for revenge after an embarrassing overtime home loss to Kansas late last season. Both teams are bowl-eligible, and the winner could have a step up on the loser in the pecking order.

Texas RB Bijan Robinson against Kansas RB Devin Neal. Sure, they won't directly face each other, but two of the best running backs in the Big 12 will be on the field and whoever has more success will have their team in good position. Robinson had a streak of seven straight 100-yard games end last week, when he carried 12 times for 29 yards against TCU. Neal went for 224 yards and a touchdown against Oklahoma State, then followed up with 190 yards rushing last week against Texas Tech.

Texas: QB Quinn Ewers is coming off arguably his worst game of the season, when the Longhorns were held under 200 yards didn’t score an offensive touchdown against TCU. The freshman has completed just 45% of his passes the past three games.

Kansas: QB Jalon Daniels could return for the first time since hurting his shoulder in a loss to TCU on Oct. 8. He warmed up before the past three games, but QB Jason Bean has played every snap. Bean has thrown for at least 200 yards in five straight games with 14 TDs and four interceptions. Bean also has 222 yards and four TDs on the ground.

Kansas will be trying to beat Texas in back-to-back years for the first time. The Longhorns have won 16 of the past 18 in the series, though the Jayhawks have won two of the past five. ... Texas hasn’t scored a touchdown in the second half of the last three games ... Robinson is seventh nationally in all-purpose yards (147.2 per game, ninth in total TDs (14) and 10th in yards rushing (1,158). ... Texas QR Xavier Worthy leads the Big 12 with nine TD receptions. ... The Longhorns had a season-high five sacks and 14 tackles-for-loss last week against TCU. ... Kansas is averaging 7.33 yards per play, second only to Ohio State for best in the nation. ... Kansas has eclipsed 500 yards total offense five times. It had six 500-yard games from 2018-21.