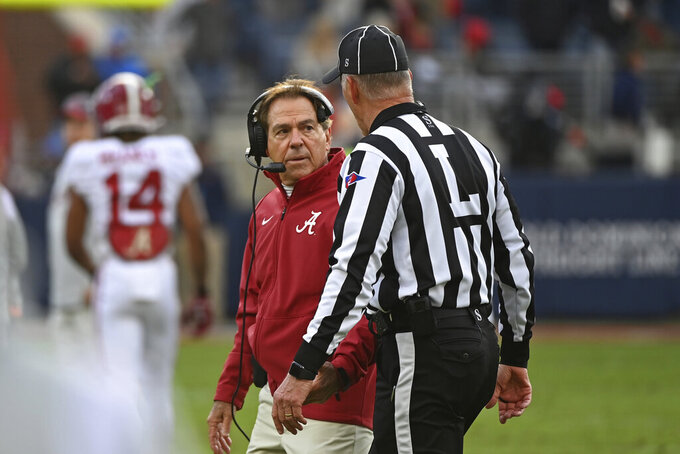 Alabama head coach Nick Saban talks with an official during the first half of an NCAA college football game against Mississippi in Oxford, Miss., Saturday, Nov. 12, 2022. (AP Photo/Thomas Graning)

The story for Alabama is what's not at stake: National or Southeastern Conference championship hopes. The Tide still can wrap up what would be a highly successful season by the standards of just about any other program. Alabama coach Nick Saban would never come out and say it publicly, but playing an FCS team like Austin Peay should afford extra playing time for young players who could earn bigger roles next season.

Alabama's defense against quarterback Mike DiLiello and Western Kentucky's passing offense. DiLiello ranks second in the ASUN with 2,300 passing yards, throwing for 21 touchdowns against nine interceptions. He has also run for 445 yards and eight scores. The Tide is led by linebacker Will Anderson Jr. and safety Jordan Battle.

Austin Peay: WR Drae McCray is one of the top receivers in FCS, ranking seventh with 929 yards and tied for 12th with nine touchdowns. He has 64 catches.

Alabama: Backup QBs Jalen Milroe and Ty Simpson could get another early audition for next season if starter Bryce Young can stake the Tide to a big early lead. Young, the 2021 Heisman Trophy winner, is projected as a high NFL draft pick if he leaves early. Milroe started the Texas A&M game. The freshman Simpson only saw brief action against Utah State.

Alabama has won 55 regular-season nonconference games, including 41 straight at Bryant-Denny Stadium. ... It's the Tide's first meeting with a current ASUN member. ... Austin Peay is wrapping up its first three-game road stretch since 2019. .. Austin Peay has won 11 straight games in November and is 5-0 under coach Scotty Walden. The Governors are averaging 202.3 rushing yards and 243.3 passing yards per game. They could become the first team in program history to average both 200 yards rushing and passing.