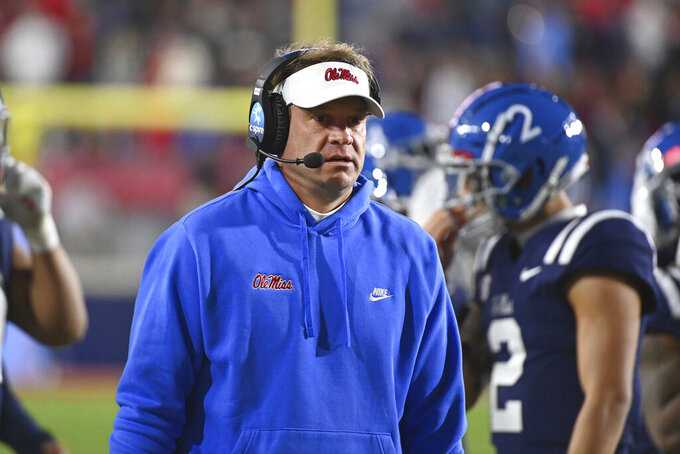 FILE - Mississippi head coach Lane Kiffin walks along the sideline during a timeout in the second half of an NCAA college football game against Vanderbilt in Oxford, Miss., Nov. 20, 2021. College football's traditional signing period, which starts Wednesday, Feb. 2, 2022, is now overshadowed by transfer moves and Kiffin has assembled one of the best groups of transferring players in the country. (AP Photo/Thomas Graning, File)

Mississippi coach Lane Kiffin has pronounced himself the portal king, but Southern California's Lincoln Riley is aiming for that crown, too.

Riley landed the biggest prize in the transfer portal on Tuesday, when quarterback Caleb Williams announced he would be joining his former coach at USC.

Kiffin has nonetheless secured one of the deepest and most talented transfer classes this cycle, taking advantage of the turnover at Southern California to reload at team that won 10 games last season.

Here are six schools that have been busy and productive in the portal:

Riley had already landed two of his former Oklahoma players in receiver Mario Williams and defensive back Latrell McCutchin before Williams made it official.

Two former Southeastern Conference linebackers were added to boost the defense in Shane Lee from Alabama and Romello Height from Auburn along with defensive lineman Tyrone Taleni from Kansas State.

Safe to say this is a make or break season for coach Scott Frost. How the Cornhuskers' transfers do could determine whether he finally turns the corner at his alma mater.

Among a dozen committed transfers are two quarterbacks: Chubba Purdy from Florida State and Casey Thompson from Texas.

Defensive back Tommi Hill from Arizona State and receiver Trey Palmer could both step into starting roles, and the Huskers are hoping a slew of players from FCS and G5 schools provide much-needed depth.

Riley's departure has meant a lot of portal activity for the Sooners, both coming and going.

New coach Brent Venables has filled holes along the defensive line with Jeffery Johnson from Tulane and Jonah La'ulu from Hawaii. McKade Mettauer from California could slide into a starting spot in the interior of OU's offensive line.

To replace Williams at quarterback, the Sooners flipped Dillon Gabriel away from UCLA. Gabriel was a two-year starter at UCF.

Another team with a coaching change that has had lots of transfer comings and goings.

Coach Brian Kelly has loaded up on defensive backs from the portal, picking up commitments from two former Arkansas starters (Greg Brooks Jr. and Joe Foucha), plus Mekhi Williams-Garner from Louisiana-Lafayette and Jarrick Bernard-Converse from Oklahoma State.

The Tigers are still minus-1 at quarterback after Max Johnson transferred to Texas A&M.

Coach Mike Norvell has been working the portal hard since he arrived in Tallahassee and that continues as he tries to get the Seminoles back on track in year three.

The headliner of this transfer class comes from an unlikely place. Jared Verse is a high-upside edge rusher who played at FCS Albany last season.

The Seminoles shopped in bulk at receiver, adding Johnny Wilson from Arizona State, Mycah Pittman from Oregon and Winston Wright from West Virginia.