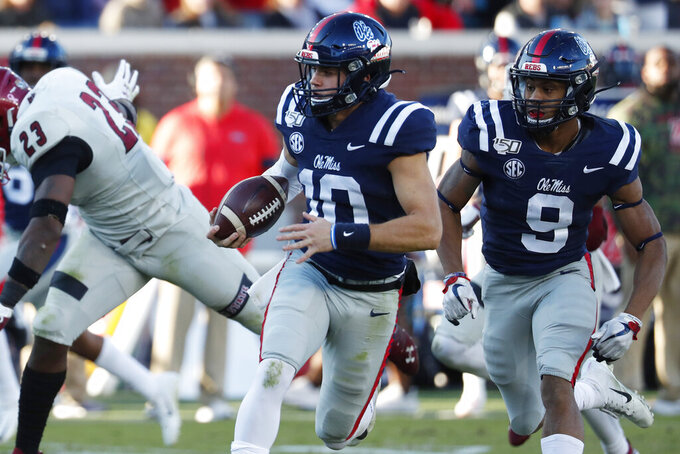 Mississippi quarterback John Rhys Plumlee (10) outruns his blockers as he has a long run for a first down against New Mexico State during the first half of an NCAA college football game in Oxford, Miss., Saturday, Nov. 9, 2019. (AP Photo/Rogelio V. Solis)

OXFORD, Miss. (AP) — Mississippi faces the daunting challenge of consistently moving the football against No. 1 LSU this Saturday, possibly without the services of Scottie Phillips.

Phillips missed the Rebels' 41-3 blowout of New Mexico State last week after injuring his ankle in a 20-14 loss to No. 13 Auburn. Head coach Matt Luke has said that Phillips' status for the LSU game is questionable.

Ole Miss (4-6, 2-4 SEC) is coming off of its most dominant rushing performance of the season, as the Rebels ran for 447 yards against New Mexico State. Approaching that output will be especially difficult against LSU (9-0, 5-0) if the Rebels are without Phillips.

Phillips ranks second on the team in rushing with 542 yards on 125 attempts. If Phillips is unable to play, Mississippi will rely on a trio of freshmen.

The freshmen have helped give Ole Miss develop a much more diverse rushing attack.

"It's really fun to see," Luke said. "Snoop runs really physically in between the tackles. It was good to see Jerrion run that way too. They broke some big plays and some explosive plays. With that zone read, they hit and attacked a lot of different areas. It was good to see that."

Plumlee ran 12 times for 117 yards and a pair of touchdowns against New Mexico State. Although Ole Miss has struggled to throw the ball, Plumlee has added another dimension to the rushing attack since taking over as the Rebels' starting quarterback in late September. He has forced opposing defenses to account for him when trying stop the run.

But with an undefeated LSU team coming to Oxford with a high-flying offense commanded by Heisman Trophy front-runner Joe Burrow, Ole Miss could have a tough time keeping pace by predominantly running the football.

Against quality defenses, an offense led by Plumlee has proved to be one-dimensional and predictable at times.

"The size of their guys up front" is impressive, offensive coordinator Rich Rodriguez said. "They're big on the edges. They are a big front. We have had times this year where I wish we could get more movement. We have struggled at times moving guys off the first level. From what we have seen so far, LSU hasn't really let anyone move them."

Ole Miss hasn't had a passing touchdown in its last three games. The Rebels have thrown for 200-plus yards in just one of their last six games.

"LSU's secondary is as talented as there is in college football," Rodriguez said. "Every position they have on defense, they run really well. Their recovery and ability to play the ball is impressive. If you are open, you are not open for long."

Ole Miss will need to rush the football well to have a chance in this game. It will be better equipped to do that with a healthy Phillips. But there are proven young options behind him.

"They have been very solid against the run and in most games, have played really good defense all around," Luke said. "We'll have our work cut out for us, but we'll have to find ways to run the football and create some one-on-one matchups. And when we do get them, we need to hit them."