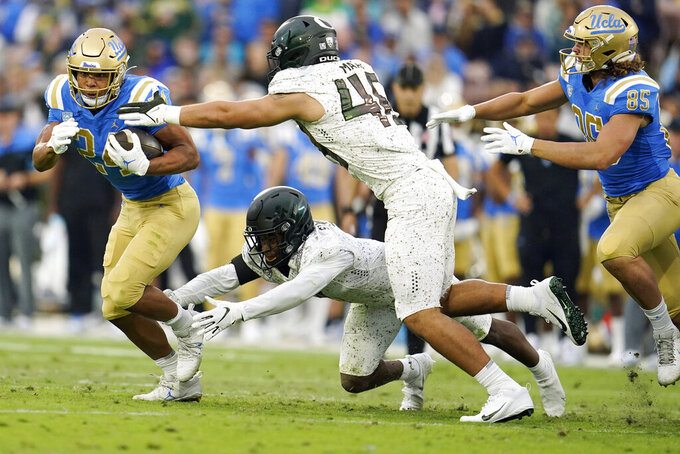 The Utes led the Pac-12 in rushing defense for three consecutive seasons heading into this year. Now Utah is the one getting bullied along the line of scrimmage.

Oregon State gashed the Utes for 260 rushing yards in a 42-34 victory a week ago. Defending the run doesn’t get any easier this Saturday when the Utes host UCLA. The Bruins average 206.1 yards on the ground per game, second only to Oregon State in the Pac-12.

Youth and inexperience have been a problem for Utah on the defensive line and a crucial factor behind the Utes giving up more than 200 rushing yards in three different games this season.

“We’re starting three freshmen D-linemen,” Utah coach Kyle Whittingham said. “You never make excuses, because if you’re out there, you’ve got to perform. But we’re just not quite where we need to be up front yet. We’ve had flashes during the course of the year, but not quite enough consistency.”

UCLA may need to lean heavily on the run game if Dorian Thompson-Robinson is not able to play Saturday. Thompson-Robinson injured his arm during the Bruins’ 34-31 loss to Oregon. He did not practice early in the week. If he can’t go, redshirt freshman Ethan Garbers will likely start.

Garbers threw a late interception that helped the Ducks fend off UCLA’s comeback. Still, the Bruins’ coaching staff has confidence in the Washington transfer’s abilities to run the offense.

“Ethan’s done a real nice job,” UCLA coach Chip Kelly said. “From when he got here last spring, progressing all the way through, he’s done a really nice job. He’s got a great grasp of what we’re doing. (We’re) real comfortable with Ethan.”

Utah and UCLA did not meet last season because of the league's shortened schedule due to the pandemic. The Utes have dominated the Bruins in recent seasons, winning four straight games in a series that UCLA leads 11-7 overall and outscoring the Bruins 190-75 in those contests.

This latest meeting could factor into which team wins the Pac-12 South. A victory would give Utah tiebreakers over UCLA and Arizona State. The Bruins would gain a tiebreaker against the Utes with a win, but the Sun Devils still hold a tiebreaker over UCLA after winning 42-23 earlier in October.

For the Bruins, the focus is squarely on ending Utah’s recent dominance in the series.

UCLA is one win away from being bowl eligible for the first time in Kelly’s four seasons in Los Angeles. The Bruins last qualified for a bowl in 2017 when they lost to Kansas State 35-17 in the Cactus Bowl.

Utah linebacker Devin Lloyd will not play in the first half against UCLA after being ejected for targeting against Oregon State. His temporary absence leaves Utah without a key defensive leader for a critical juncture. Lloyd leads the Pac-12 with 13 tackles for loss and is tied for first in the league with seven sacks. He is also the leading tackler for the Utes overall with 68.

UCLA cornerback Cameron Johnson will also miss the first half after being ejected for targeting in the third quarter against Oregon. Johnson has 23 tackles and two pass breakups for the Bruins this season.

Kyle Phillips has tallied at least one reception in each of his last 25 games. With three catches on Saturday, Phillips can move into UCLA’s all-time top 10 list for career receptions. He is currently 12th with 136 career catches and will tie Brian Poli-Dixon for 10th with three more. Phillips has led the Bruins in receptions each of the previous two seasons, totaling 98 over that stretch.

Utah will retire No. 22, the jersey number worn by Ty Jordan and Aaron Lowe, in a special ceremony between the first and second quarters Saturday. The ceremony will also feature a video tribute to Jordan and Lowe, friends and teammates who died nine months apart.

Jordan died at 19 in an accidental shooting on Christmas Day 2020 and Lowe changed his number to honor his friend. The 21-year-old Lowe was shot at a house party on Sept. 26, hours after Utah’s game against Washington State.