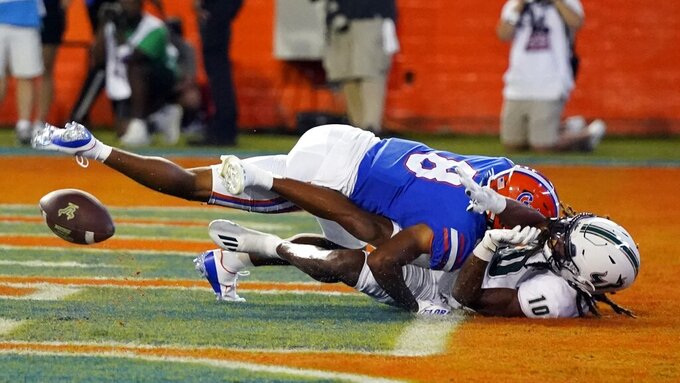 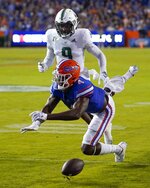 He can thank cornerback Tre’Vez Johnson, running back Trevor Etienne and South Florida's late gaffes for getting him off the hook.

USF's Spencer Shrader missed a 49-yard field goal with 23 seconds left that likely would have sent the game into overtime. Shrader had little chance of making the kick after holder Andrew Beardall dropped the ball while trying to get it set.

“We got a lot of work to do. That's very obvious,” Florida coach Billy Napier said. “But credit to our team for sticking together and finding a way to win."

Nonetheless, the back-and-forth game will be remembered mostly for Richardson's miscues and his team's inability to stop the run against a 24 1/2-point underdog that entered the game having lost 19 of 23 under third-year coach Jeff Scott.

“We came here to win the game. We did not get that done," Scott said. “That hurts.”

Richardson was off most of the night for the second straight week. He completed 10 of 18 passes for 112 yards and two interceptions. The first one led to seven points for the Bulls. The second one cost his team points. Richardson checked out of a run on a first-and-goal play from the 5 and attempted a back-shoulder throw to Justin Shorter. Cornerback Aarmaris Brown picked it off.

“I have no issue with the decision. It's how he threw it," Napier said. “Simple play, got to be executed better."

Richardson added: "I just didn't give him a chance to make a play on the ball."

It was the second straight game that Richardson did more harm than good for Florida (2-1). He threw two interceptions last week against Kentucky, both of them leading to short field and touchdowns for the Wildcats in a 10-point loss.

Richardson was hoping to rebound against South Florida, which entered the game with one of the worst defenses in college football. Instead, he left some Florida fans questioning whether he's a long-term solution at the all-important position.

Florida looked to be in trouble after Richardson's second pick. They trailed 28-24 and needed help. Johnson delivered, intercepting Gerry Bohanon’s third-down pass on the ensuing possession and giving Florida the ball back with a short field.

Napier turned to Etienne, the younger brother of Jacksonville Jaguars running back Travis Etienne. Trevor Etienne carried the ball four straight times, the last one into the end zone to put Florida back in front.

The Gators still needed a stop to preserve the victory. They got help from the Bulls (1-2), who botched a shotgun snap, lost 14 yards and ended up with a longer field-goal try than expected on their final play.

Montrell Johnson ran for 103 yards and a touchdown to lead Florida. Etienne added 56 yards on the ground. Richardson was the story, though. He looked more like former Florida quarterback Treon Harris than retired NFL star Cam Newton (the guy he's been compared to) as a passer.

Florida doesn't have a TD pass in three games, a skid for a program accustomed to tossing the ball around with success.

“We put the ball in his hands and ask him to do a lot. He's going to make mistakes," Napier said.

Brian Battie led the Bulls with 150 yards rushing and a touchdown. Bohanon chipped in 102 yards and a score on the ground. But his two interceptions were the difference for a team than finished with 286 yards rushing.

“That game showed we can play with anybody," Bohanon said. “We showed it is about us.”

South Florida: The Bulls fell to 0-3 against Florida, but this one was considerably closer than the previous two. It could be a sign USF is closing the gap on the Gators, who remain the only Sunshine State team that hasn’t lost to South Florida.

Florida: The Gators failed to score in the third quarter for the third time in as many games this season, an eye-opening trend in Napier’s first season. Florida has been outscored 24-0 by Utah, Kentucky and South Florida in the frame.

South Florida: Plays at Louisville next Saturday, the Bulls’ first trip there since 2012.

Florida: Plays at Tennessee next Saturday, the Gators’ first road trip of the season.