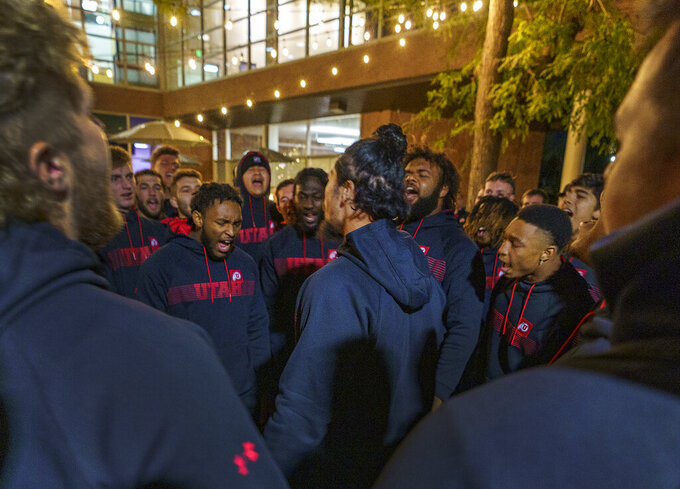 Members of the University of Utah football team mourn the loss of fellow student-athlete Aaron Lowe during a candlelight vigil on the southwest lawn of the university's student union, Wednesday, Sept. 29, 2021, in Salt Lake City. Lowe was fatally shot at a house party early Sunday, Sept. 26. (Leah Hogsten/The Salt Lake Tribune via AP)

LOS ANGELES (AP) — For the second time in less than a year, Utah coach Kyle Whittingham is trying to help his players deal with the loss of a teammate.

Whittingham hopes the Utes can find some solace on the field when they play at Southern California on Saturday, their first game since safety Aaron Lowe was killed in a shooting at a postgame party.

“That’s exactly the sentiment that the leadership council said is the best way to heal and the best way to get through this together is to get back to doing what they love and one of the main reasons why they’re here,” Whittingham said. “That’s getting back to some sense of normalcy, but at the same time you never put it out of your mind. But it’s just a therapy in and of itself, I guess you could say, getting back on the field.”

Lowe was shot on Sept. 26, hours after Utah defeated Washington State and nine months after running back Ty Jordan died in an accidental shooting on Christmas night 2020.

Lowe and Jordan were friends and high school teammates in Mesquite, Texas. Lowe switched his jersey number to Jordan’s No. 22 this season and was the first recipient of a memorial scholarship established in Jordan’s honor.

“I mean, it kind of all is wrapped into one now, so it’s been the most challenging year of my coaching career, hands down, without any question,” Whittingham said.

Freshman cornerback Clark Phillips III said Utah (2-2, 1-0 Pac-12) hopes to use the rest of this season to honor Lowe. The Utes are one of just three teams without a conference loss, along with No. 22 Arizona State in the Pac-12 South and Oregon State in the North, so a division crown or conference title and Rose Bowl berth are still in play, especially if they can win at USC (3-2, 2-2) for the first time since 1916.

“As a team, we’re trying to use this to propel us forward and get closer,” Phillips said. “Now it just makes us realize life ain’t promised. Love those you can love.”

Utah will charter a flight to attend Lowe’s funeral in Texas on Monday. Whittingham said attendance will not be mandatory but all players, coaches, and team staff who choose to go will be able to travel to Texas.

USC has yet to win consecutive games this season, but the Trojans have lost back-to-back home games despite being double-digit favorites against Stanford and Oregon State. “I don’t think anybody should come into your own home and wreak havoc, and you should do that yourself so it’s definitely a point made this week,” wide receiver Drake London said.

Utah quarterback Cameron Rising, who sustained a season-ending injury against USC in 2020, has reenergized the offense since replacing Baylor transfer Charlie Brewer in a triple overtime loss to San Diego State. Rising is 32 of 55 passing for 290 yards and three touchdowns since taking over, but his best attribute has been avoiding mistakes. Rising has not turned the ball over and has been sacked just once.

USC quarterback Kedon Slovis delivered the best performance of his junior season in a 37-14 win at Colorado, throwing for 276 yards and three touchdowns without an interception. He continued his strong rapport with London, who had nine receptions for 130 yards and a touchdown, and also got imposing freshman tight end Michael Trigg involved with his first touchdown catch. “Right now, I like what I see from Kedon,” interim USC coach Donte Williams said. “The look in his eyes right here, the eyes never lie, and the look in his eyes right now are really good.”